It’s 1 a.m. on a Monday, and I am currently on the phone having an argument with a guy I’d been on only four dates with, three of them good. One of them—the last—was less good, given he had gone MIA for the better part of three weeks and I had a sneaking suspicion he had a girlfriend.

We hadn’t slept together, but the kisses had been the type of kisses you walk away from with shaky knees and blind hope. There was something there, and we both knew it, which is why we were attempting to hash things out over the phone at some ungodly hour. Because at our age, we’re adults, and things matter more. The mistakes leave marks.

Alex is 38. I’m 30. Technically, there are no “people our age.” But I’m starting to feel that a 30-year-old woman might as well be a 40-year-old man, though infinitely less desirable, culturally speaking.

At 40, a man is well into hitting his stride, something the guy I’m arguing with is all too aware of, as evidenced when he professes on multiple occasions, “I’m an amazing guy.” “We’re killing it. KILLING IT,” he tells me, while explaining that he’s been caught up in his rapidly expanding architecture firm.

Alex sees his stock rising. For a man, age brings success, wisdom and the Hollywood-approved wrinkles of Robert Redford. And, while I too find that my career is on the up, it doesn’t matter, because time, for a woman, is hardly as kind as it is to a man. My career successes, my triumphs as a human being, are trumped by the fact that my looks—and my ovaries—have a shelf life. Biology and Sociology 101.

Interestingly enough, Alex and I, with nearly a decade between us, are two people on the same page in terms of what we are looking for in a relationship. In New York, men approaching their 40s begin to feel the weight of time more acutely, something women are confronted with the moment they start their first period. While boys are still sitting in the school parking lot burping up Cokes and Doritos, young girls are in some ways exposed to the long, faint shadow of their mortality, a life defined by precise timing and narrow windows—girlhood and fertility immediately presented to you as finite and limited. Everything has its end.

Men, on the other hand, start to engage with their bodies only decades later, when something goes wrong. A slow-healing broken arm, a herniated disc, high blood pressure: These are the wake-up calls, when aging men begin to wrestle with the thought of impending death, or at least not wanting to be an old dad. Overnight, their biological clocks start ticking. They want kids. They want a partner. Their timer has gone off. DING DING DING.

After decades after messing around, they’re ready to settle down. Which is precisely where Alex was at about a year ago with his ex-fiancée, who—kudos to Alex—was four years his senior and under the crushing pressure of having kids right away, lest the opportunity pass them by altogether—or, more precisely, pass her by. Alex couldn’t handle the idea of having kids right away and broke it off, because he had the luxury his fiancée did not: namely, time. And the ability to eventually, when he was ready, find someone 15 years younger to have children with.

Which brings us to the point when he finally—after nearly an hour on the phone explaining that he’s been so hot and cold because he’s too busy with work, because he’s very into expanding his business, because he’s shy—admits he’s been seeing some 20-something girl named Anouk for the past few months.

This, by the way, follows this part of the conversation by about 20 minutes:

Alex: Well, what do you want?

Me: I want to love someone and I want them to love me.

Alex, of course, self-professed amazing person that he is, is not very well versed in Newton’s Third Law and its role in relationship physics. I was guarded because he did things that made me sense he had a girlfriend. Which he did. But that’s not his fault. Because Alex the Architect is amazing!

As though any amount of talking is going to make this better, Alex continues to tell me about Anouk, who doesn’t mind his going on dates with other women because he “doesn’t love her,” and who he is dating precisely because she’s not looking for anything at all.

It’s this logic that has most of my 30-something guy friends dating girls fresh out of college. Girls who, in my experience, are less impressive, less striving, less volatile, less successful, less intimidating, less questioning, less pressing, less complex, less damaged, less opinionated, less powerful, less womanly. They are less, and, to a guy not ready for anything—like most of the guys I have dated in New York—less is more.

A 30-year-old woman is an undertaking, and it’s the real reason Alex has been putting me on the back burner for the past two months, telling me that I’m amazing and that he’s interested and then disappearing to hang out with a 23-year-old instead. Age ain’t nothing but a number, until it’s a number someone else doesn’t want to deal with.

Jenny Bahn is a writer and editor (and former model) living in a yet-to-be-ruined part of Brooklyn. You can find her work on V Magazine, CR, The Style Con, Lady Clever, Harry’s, and, of course, on xoJane. 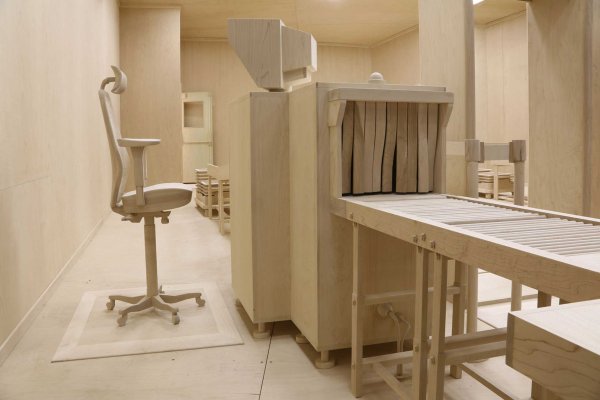 Keep Your Shoes on for This All-Wood Airport Checkpoint
Next Up: Editor's Pick