In this undated photo released by Amnesty International, Chinese made weighted leg cuffs are displayed at the Chengdu Jin'an Equipments booth at an exhibition at an undisclosed location
AP
By Elizabeth Barber

Chinese companies are increasingly getting into the business of selling torture instruments, such as restraint chairs and spiked batons, to police departments in countries with miserable human rights records, Amnesty International claimed in a report on Tuesday.

At least 130 Chinese companies are now selling or manufacturing such equipment, up from just 28 a decade ago, the rights group says.

But as more Chinese companies enter the business, Beijing has not upped protocols to ensure that the exports do not end up in the wrong hands. Instead, most of the equipment is going to African countries where the rule of law is poor and where the potential for abuse is high, according to the respected human-rights watchdog.

Some of the Chinese-made equipment, such as handcuffs and projectile stun guns, is standard police issue that “can have a legitimate use in law enforcement if used correctly and in line with international standards for law enforcement,” says Amnesty.

However, other instruments are described by Amnesty as “inherently abusive” and include weighted cuffs, neck cuffs, electric shock batons and spiked batons, among others.

The report is a collaboration between Amnesty and the Omega Research Foundation, a British group that studies the international use and distribution of law-enforcement equipment. Liberia, Uganda and Madagascar are among the countries that have imported such equipment from China.

The use of torture to extract confessions is ubiquitous in China, although the government has pledged to crack down on the practice. This week, three police officers and four security personnel from the Chinese city of Harbin were convicted of torturing seven suspects to get confessions, according to Xinhua, China’s state news outlet. One of the tortured suspects died of his injuries, Xinhua said. 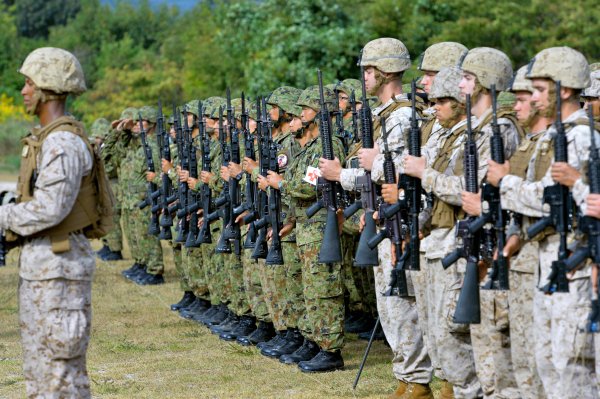 U.S. Steps Up Military Training With Japan
Next Up: Editor's Pick