The U.S. Is Risking Stalemate by Expanding the Anti-ISIS Air War Into Syria

The U.S. attacked targets inside Syria early Tuesday with Tomahawk missiles like this one, shown being launched against Libya from a U.S. Navy warship in the Mediterranean Sea in 2011.
U.S. Navy / Getty Images
By Mark Thompson

Tuesday’s bombing of Islamic militant targets inside Syria by U.S. and allied aircraft marks a sharp escalation of the conflict, with no guarantee of success.

The strikes, in and around Raqqa, the Syrian city that is the home base of the Islamic State in Iraq and Greater Syria (ISIS), began with 47 Tomahawk cruise missiles fired from U.S. Navy ships. Air Force and Navy warplanes, along with unmanned drones, followed in their wake, defense officials said. The Air Force’s F-22 fighter-bomber also made its combat debut during the operation. Bahrain, Jordan, Qatar, Saudi Arabia and the United Arab Emirates played unspecified roles in the attacks. All aircraft returned safely.

ISIS wasn’t the only group targeted inside Syria. “Separately, the United States has also taken action to disrupt the imminent attack plotting against the United States and Western interests conducted by a network of seasoned al Qaeda veterans—sometimes referred to as the Khorasan Group—who have established a safe haven in Syria to develop external attacks, construct and test improvised explosive devices and recruit Westerners to conduct operations,” the Central Command statement added. “These strikes were undertaken only by U.S. assets.” The Pentagon conducted eight strikes against Khorasan targets west of the Syrian city of Aleppo, including “training camps, an explosives and munitions production facility, a communication building and command and control facilities.”

“We wanted to make sure that [ISIS] knew they have no safe haven,” Army General Martin Dempsey, chairman of the Joint Chiefs of Staff, told reporters as he flew back to Washington from Europe. “We certainly achieved that.”

Expanding the set of ISIS targets—the U.S. had attacked some 200 ISIS locations, all in Iraq, before Tuesday—is a military gamble with unpredictable consequences.

President Obama warned he would launch expanded strikes in a speech on Sept. 10.

“I have made it clear that we will hunt down terrorists who threaten our country, wherever they are,” Obama said. “That means I will not hesitate to take action against [ISIS] in Syria, as well as Iraq. This is a core principle of my presidency: if you threaten America, you will find no safe haven.”

The Pentagon’s war plan “includes targeted actions against [ISIS] safe havens in Syria — including its command and control, logistics capabilities, and infrastructure,” Defense Secretary Chuck Hagel told Congress last week. “Our actions will not be restrained by a border that exists in name only.”

U.S. intelligence assets — including satellites and drones — have therefore been scouring eastern Syria for ISIS targets in recent weeks.

The new attacks, against fixed ISIS targets, undoubtedly did significant damage. But they also will force ISIS fighters to hunker down, now that their sanctuary inside Syria has been breached. This means that the jihadists, who have shown little regard for civilians, will move in among them in the relatively few towns and villages in eastern Syria, betting that the U.S. and its allies will not attack them there and risk killing innocents.

That could lead to a stalemate. While air strikes are likely to keep ISIS from massing its forces, and traveling in easy-to-spot convoys, air power can do little to stop small groups of fighters from billeting with and intimidating the local population.

Senior U.S. military officers, including Army General Martin Dempsey, chairman of the Joint Chiefs of Staff, and General Ray Odierno, the Army chief of staff, have said in recent days that they may recommend to Obama that small numbers of U.S. ground forces be sent into the fight, to ensure the accuracy of U.S. air strikes.

But most of the fighting on the ground in Iraq against ISIS will be done by Iraqi forces, U.S. officials say. “Moderate” Syrian rebels will battle ISIS on the ground inside Syria. However, the U.S. plans to train only 5,000 such rebels in the coming year — a small force compared with ISIS’s estimated 30,000 fighters. That mismatch is another reason why the conflict could bog down.

U.S. military officials have made it clear that if they are to have any chance of success against ISIS, they have to be able to strike at it inside Syria. In Afghanistan, the ability of the Taliban to move into Pakistan, where they were safe from U.S. attacks, is a major reason why they remain a potent threat to Afghanistan’s future stability, even after 13 years of war.

The Syrian government of Bashar Assad has a robust air-defense system — focused, admittedly, in the western part of the country, near the capital of Damascus, and not in the relatively desolate east. Nonetheless, its existence means that U.S. air strikes are not without risk.

ISIS and other anti-Assad groups have been waging a civil war, in which 200,000 people have died, against the Syrian government for three years. It’s that war — and the sectarian strife across the border in Iraq — that ISIS has been able to exploit. Over the past year, it has seized a vast portion of eastern Syria and western Iraq and declared it to be an Islamic state. 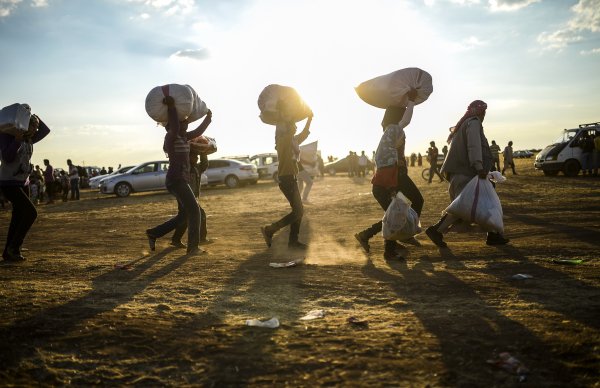