Environmentalists hope Monday will come to be viewed as an “economic tipping point” in the battle against climate change.

More than 700 investors pledged to divest their holdings from fossil fuel companies, just a day after an estimated 400,000 demonstrators marched through the streets of New York to demand that world leaders take action to stop climate change at a United Nations summit this week.

The divesting organization garnering all the headlines is the Rockefeller Brothers Fund, a respected charity that is run by the heirs of John D. Rockefeller, who built his fortune refining oil at Standard Oil Company. The Rockefeller Brothers Fund and about 50 other foundations have a combined $4.2 billion in assets total, which will no longer be invested in fossil fuel companies. Combined with individual investors and other institutions, such as colleges and faith groups, a total of $50 billion assets has been pledged to not be invested in fossil fuel companies. “It’s not huge, but its a very important signal to the market,” says Stephen Heintz, President of Rockefeller Brothers Fund.

For recent University of California, Berkeley graduate Katie Hoffman, the idea that the heirs of an oil tycoon would reroute billions of dollars away from fossil fuel companies was laughable when she began advocating that her school divest from those businesses in 2011. But it was she and other college activists who actually gave the divestment movement legs in its nascent days. “We’ve been integral in the process, and that’s been seen by folks who are actually driving and funding the movement,” Hoffman said at the event in New York where the Rockefellers announced their intentions Monday. “We have a stake in this. This is our future.”

The divestment movement began at Swarthmore College, a small Pennsylvania liberal arts school, in 2011. Students there, who could visibly see the impact that coal mining was having on the nearby Appalachian Mountains, began advocating that their school divest its billion-dollar endowment out of the largest companies that profit from drilling for and distributing fossil fuels. “In asking for divestment, we are implicitly stating that investment is a choice,” Mountain Justice, Swarthmore’s student-led divestment advocacy group, says on its website. “ It is a political choice with global consequences. Choosing to invest in an industry means financially endorsing that industry’s practices.”

Students at other schools, like Hoffman at UC Berkeley, quickly picked up the fight. Overall, 400 college campuses now have active divestment movements. The campaigns mirror previous efforts to deal with moral and political issues via economic means. In the 1980s, it was college students that first pushed their administrators to divest holdings from companies doing business in South Africa, where the racist regime of apartheid still reigned. More recently, prominent schools such as Harvard and Brown divested from companies operating in Sudan because of atrocities occurring in Darfur.

The calls for fossil fuel divestment had, until this point, been met with a more muted response. Despite birthing the movement, Swarthmore has continually maintained that divesting would hurt the school’s endowment, which it says it not meant to be used to advocate for social purposes. The UC system shot down a student-led divestment proposal last week. Other schools with large endowments, like Harvard and Brown, argue that divestment is a symbolic move that won’t affect energy companies’ bottom lines, or that more positive change can be made through shareholder activism.

Still, there has been some progress for advocates. A total of 15 colleges have divested from fossil fuels, according to Arabella Advisors, a consultancy firm for philanthropies. The most notable is Stanford University, which agreed in May to divert its $18.7 billion endowment away from coal companies. Activists hope that the big names associated with Monday’s divestment announcement, including the actor Mark Ruffalo, will encourage more schools and other organizations to divest. “This movement has gone beyond higher education,” says Jess Grady-Benson, a recent graduate of Pitzer College, which agreed to divest from fossil fuels in April.

Despite the movement’s growth, young people continue to play a central role. Divestment activism is likely to spread to many more campuses as the school year gets underway. “Youth have always gone to the conferences or the parties, but we’re always outside,” Hoffman says. “Divestment gets us in the board room, which is really exciting.” 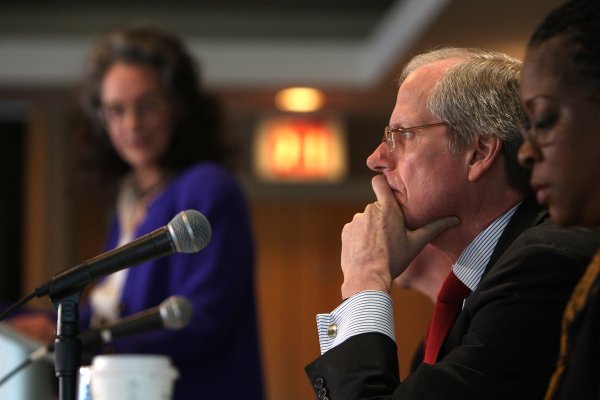 Rockefeller Charity to Pull Out of Fossil Fuels
Next Up: Editor's Pick