About half a million Gaza children returned to school two weeks ago, after a summer of war. But the restart has faced many challenges including supply shortages, limited facilities and widespread trauma among students and faculty alike, according to a UN report.

As teachers read attendance sheets on the opening day last week, their roll call also served as an account of the dead. 500 children were killed in Gaza during the 50 days of fighting, according to UN figures.

“Many of our friends were not in school,” Khetam Kafarna, a 17 year-old shelter resident, said after her first day of classes in Beit Hanoun. “Some have moved. Some of the girls died. Now we are all strangers to each other.”

The summer months brought seven weeks of fighting between Israel and militants in Gaza – over 2,100 Palestinians were killed, and over 100,000 Gazans were left homeless. Seventy-one Israelis were also killed in the fighting, 66 of them soldiers.

During the bloody summer months, schools in Gaza became a focal point of the violence and destruction throughout the region. Twenty-two schools were completely destroyed during the conflict and at least 118 more damaged. Gaza’s schools—already stressed before the war, with classes running in double shifts as a result of school shortages—are now facing acute overcrowding, the UN said.

In southern Israel, where local children were subject to frequent scares from rocket sirens throughout the summer, classes started on time but with a changed curriculum that would include activities to provide emotional support to students, according to the Israeli Education Ministry.

The bombing of school-shelters has become one of the most controversial aspects of the entire conflict. Israel said in at least some of these cases that they were responding to nearby rocket fire or targeting militants in the area. The military is reviewing some of the incidents. Prime Minister Benjamin Netanyahu also said that Hamas used “schools, residential buildings, mosques and hospitals to fire rockets at Israeli civilians.”

The United Nations Relief and Works Agency (UNRWA) “unreservedly condemned” the attacks and has also called for investigations. In three cases, however, UNRWA did discover and publicly condemn the use of its Gaza facilities by militants to store rockets.

Meanwhile, students in Gaza returned after a three-week delay to find schoolhouses with walls bombed to rubble, chalkboards ripped apart by artillery shells and the remains of books and school supplies littered in charred piles.

There are many wounds to heal. Children in Gaza have experienced three wars between Israel and Hamas in just the past six years. At the UNRWA schools, which serve 241,000 students across Gaza, the first week was completely devoted to psycho-social counseling and support. Students participate in supervised activities like drawing and storytelling, and are monitored for further therapeutic needs.

“It’s important that we continue to move forward, and to bring back a sense of normalcy,” said Dr. Iyad Zaqout, who manages the UNRWA community mental health program in Gaza. “This is the best way that we can overcome the scars of war.”

On opening day last week in the courtyard of one UNRWA school in Gaza City, hundreds of girls gathered in matching pinstriped dresses and jeans. They danced and giggled and held hands and sang. But pupils and teachers around Gaza have also found themselves at a loss for space for classes. Over 90 UNRWA schools were converted into shelters during the war, housing up to 290,000 people displaced by the violence.

In one school-turned-shelter in Gaza City, dozens of temporary residents gathered with brooms and rags in the courtyard of to help clean the well-worn facility. Other residents complained of a lack of water in the shelters. There are still over 50,000 Gazans sheltered in UNRWA schools throughout the territory, the agency said. Across Gaza, colorful laundry still draped the light blue railings of UN schools, and old desks had been stacked with curtains used to turn classrooms into cavernous homes reminiscent of childhood fortresses. Families slept out on the open-air walkways at night to keep cool.

Alaa Eliwa, an 8th grader from the Shaaf area east of Gaza City, lost her home and all of her belongings in an airstrike. She had been living for weeks with her family on the barren 3rd floor of a UN school building in Gaza City. Eliwa said she was excited to start school, counting drawing, reading and writing among her hobbies. Alaa had risen before dawn on Sept. 19 to travel across the city, where she would start classes in another UN school building.

“It’s also good that we can leave these classrooms where we live, instead of staying here all day long,” she said. “School provides us with some change.” 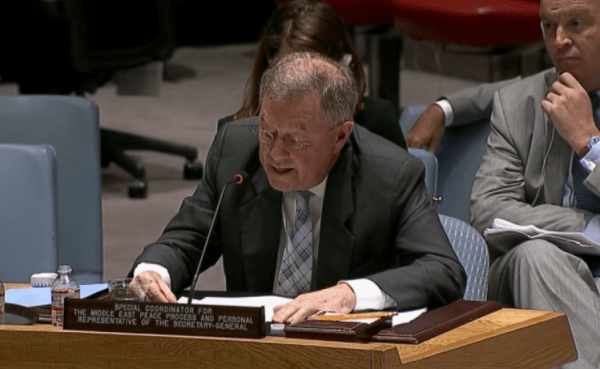 U.N. Announces Deal to Rebuild Gaza
Next Up: Editor's Pick