Climate change activists staged a sit-down protest on Wall Street against the role of large corporations in global warming on Monday, a day after an estimated 400,000 people demonstrated at the People’s Climate March in New York City.

Organizing under the hashtag #FloodWallStreet and dressed mostly in blue, protestors began their sit-in at New York City’s Financial District around noon. At least two people were arrested later in the day, Buzzfeed reported, as some protestors clashed with police at the sit-in.

“Two years ago, Superstorm Sandy literally flooded New York’s Financial District — but it didn’t phase Wall Street and their drive for the short term profits that flow from the cooking of the planet,” author and activist Naomi Klein said in a statement about the event. “Which is why we’re going to flood them again.”

Gothamist reports that while police “appeared reluctant” to make arrests (the rally did not have a permit), the protest turned tense when officers and demonstrators fought over barricades in the late afternoon, while multiple Twitter users claimed pepper spray had been used against protestors.

The NYPD’s director commissioner for strategic initiatives remarked on the protests in a tweet late afternoon: 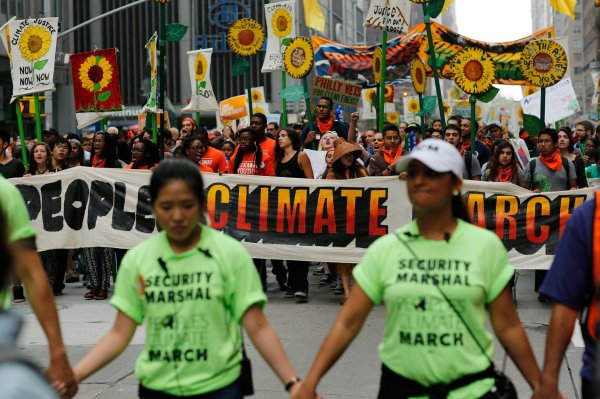 See Thousands March for Climate Change
Next Up: Editor's Pick