Uniformed Secret Service officers walk along the lawn on the North side of the White House in Washington on Sept. 20, 2014. The Secret Service is coming under renewed scrutiny after a man scaled the White House fence and made it all the way through the front door before he was apprehended.
Susan Walsh—AP
By Zeke J Miller

A former soldier suspected of jumping the White House fence while armed with a knife Friday had 800 rounds of ammunition in his car, a prosecutor claimed Monday.

Assistant U.S. Attorney David Mudd said during a preliminary hearing that Omar J. Gonzalez also had a hatchet and a knife in his automobile, but no gun. The prosecutor said Gonzalez, who was also arrested in August for possessing a sniper rifle and a sawn-off shotgun, represented a danger to the president, the Associated Press reports.

The news came the same day as President Barack Obama’s spokesman said he was “obviously concerned” about Friday’s fence-jumping incident at the White House.

White House Press Secretary Josh Earnest said Obama was briefed multiple times Friday night and updated throughout the weekend on the investigation into how the alleged jumper made it into the Executive Mansion, which prompted a short evacuation of part of the sprawling complex.

Secret Service Director Julia Pierson ordered a security review of the White House and of the events leading up to Friday’s incident, which occurred minutes after the First Family departed the South Lawn on Marine One for a weekend trip to Camp David. White House officials and Secretary of Homeland Security Jeh Johnson are are awaiting the results of the investigation.

“In the meantime, I encourage all of us to not rush to judgment about the event and not second-guess the judgment of security officers who had only seconds to act, until all the facts are in,” Johnson said in a statement Monday.

“Providing security at the White House is complicated business,” Earnest said, adding that Obama still has confidence in the agency charged with protecting him and his family.

“The Secret Service has the challenging task of balancing the need to ensure the safety and security of the first family, while also ensuring that the White House continues to be the people’s house,” Earnest said. “And balancing those equities is challenging work, but it’s clear that in this case a review of that work is warranted and that review will be conducted.” 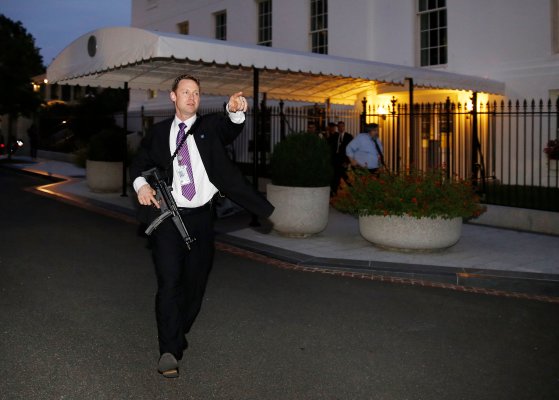 White House Evacuated After Fence-Jumper Gets Access
Next Up: Editor's Pick