Getting Poor to Get Help: How a Tragic Accident Trapped My Family in Poverty

Nearly one-third of American households live in or near poverty. The causes are myriad – and much contested. Those on the political right tend to cite the personal shortcomings of poor individuals while those on the left blame systemic barriers to upward mobility. But as my family has painfully learned, there is another shocking cause: government policy.

In February 2012 my sister-in-law Marcella was in a car accident on her way to nursing school, where she was working towards a career which she hoped would catapult her and my brother Dave into middle-class security. Instead, the accident plunged them into the world of American poverty programs. Marcella is now a quadriplegic, paralyzed from the chest down. She needs round-the-clock personal care and assistance. The only source – public or private – for a lifetime of such coverage is Medicaid. But because Medicaid is the government health insurance for the poor, she and my brother must be poor in order to qualify. (Medicare does not cover long-term supports and services, and private long-term care insurance is time-limited and useless to a 32-year-old who needs decades of care). Thus, Marcella and Dave embarked on a hellish journey to lower their income and shed their modest assets to meet the state limits for Medicaid coverage.

To meet the income requirement, my brother reduced his work hours to make just 133 percent of the poverty level (around $2,000 per month for their family). Anything he earns above that amount simply goes to Medicaid as their “share of cost” – a 100 per cent tax.

Worse: the asset limit. In California, where they live, they can own only $3,150 in assets beyond their home and one vehicle. They’re “lucky,” a social worker tells Dave: if not for the baby (Marcella was pregnant at the time of the accident; the baby miraculously survived), the asset limit would be $3,000. As if you can raise a child on $150. This asset limit was last raised in 1989. It has fallen by half in real value since then.

Dave and Marcella began to liquidate. Under California rules, retirement plans are not exempt from the asset test. Marcella had to cash in a small 401(k) account from a previous job, paying the early withdrawal penalty to boot. Dave had to abandon his hobby, working on old cars, which violated the asset test. He sold them all, keeping a 1968 Datsun pickup because its tiny value didn’t impinge on the asset limit. The pickup is 45 years old, weighs less than a Miata, and has no modern safety features. The only able-bodied adult in the family has to drive to work in an unsafe vehicle. And they had to empty their bank account, watching their hard-earned security disappear.

As Dave and Marcella spent down their assets, they had to keep track of every penny. They could only put the money into the exempt items, the house and the used wheelchair van they bought for Marcella. They could not use the money to pay credit card bills, household bills, or Marcella’s student loans from her undergraduate degree. And they are barred from doing any of the things the middle class is constantly advised to do: save for retirement. Create an emergency fund. Save for college with a tax-free 529 plan. Just $3,150 in assets – that’s it.

What happens in an emergency? One day the van’s wheelchair ramp stopped working. The repair cost $3,000—the sum of their meager assets. Fortunately their tax refund had just come in and went straight back out to pay for the repair. We don’t know what they’ll do next time.

True universal health insurance. A universal social insurance program for long-term care, not just Medicaid. And one modest change: no asset test. Policy is already trending in that direction. Under the Affordable Care Act, those newly eligible for Medicaid face no asset test. (Unfortunately those in the original eligibility categories, including the disabled like Marcella, are still under the old rule.) About half of the states have no asset test for any Medicaid recipient; perhaps someone realized that trying to ferret out the tiny amount of resources most Medicaid applicants have is inefficient. As for Dave and Marcella, I suppose they might move to a state with more generous rules. However, no state helps with wheelchair renovations. Lacking the assets to buy a new house elsewhere, they must remain in the home their friends renovated for them on an entirely volunteer basis.

It’s bad enough that America’s system of social supports is so limited. That the government also forces some of its citizens to get poor to get the help they need is an abomination.

Andrea Louise Campbell is professor of political science at the Massachusetts Institute of Technology. She is the author of Trapped in America’s Safety Net, out this month. 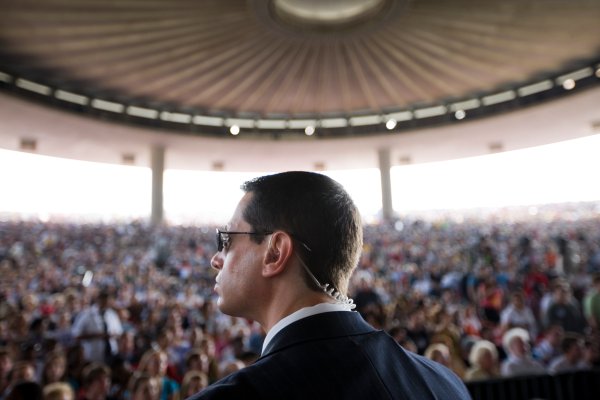 The Secret Service Thinks We Are Fools
Next Up: Editor's Pick