In one of the many tales of Arabian Nights, a poor woodcutter named Ali Baba discovers untold treasure in a thieves’ den. On Friday, Jack Ma and his similarly named company did the same thing on the New York Stock Exchange.

Alibaba, the Chinese Internet giant best known for its massive online marketplaces, saw its shares jump 38% in its first day of trading as a public company in the United States. The company raised $21.8 billion when it priced its IPO shares at $68 Thursday night, making it the largest public offering ever globally. But investor demand for a piece of the Chinese firm far outstripped expectations, pushing shares to rise to $92.70 when they finally began trading around noon Friday. Following a brief spike above $99 right when they hit the trading floor, shares mostly floated near the opening price during the day. Alibaba closed at $93.89, giving it a market capitalization of $230 billion. A company started by Ma and his friends in his Hengzhou apartment in 1999 is now more valuable than every U.S. tech company except Apple, Google and Microsoft.

“I feel excited and honored and I also feel very humbled,” Ma told Fox Business News in an interview from the trading floor. “It’s a great blessing from the world and we are so excited by the trust we got today.”

Alibaba has often been referred to as the “Amazon of China,” but it has more in common with eBay and Google. The company doesn’t sell products directly but instead acts as a kind of online bazaar where vendors small and large can hawk their wares to potential customers. It makes most if its cash by selling ads tied to keyword search results, like Google, and sometimes charges a commission on transactions, like eBay. It’s a simple business model that has proven wildly successful. The company estimates that it processes about 80% of all online sales in China and racked up $248 billion in retail transactions last year. Alibaba generated $2 billion in profit in the most recent quarter, more than eBay and Amazon combined.

So it’s no wonder that U.S. investors have been salivating over Alibaba for years. The company has become the face of the fast-growing tech scene in China, where 800 million residents are expected to be online by next year. Prior to the IPO, Wall Street used Yahoo, which has a large stake in Alibaba, as a proxy investment to benefit from these Chinese giant’s huge earnings. Now investors can tap into those profits directly. “You combine access to a rapidly growing middle income Chinese consumer to an unusual story in e-commerce,” says R.J. Hottovy, an equity analyst at Morningstar. “It adds up to one very compelling story.”

There are some caveats to Alibaba’s growth story. The company has an unusual governance structure that gives outsize power to Ma and the other founders. Ma has used this power in the past to make huge financial decisions unilaterally, such as when he sold off the mobile payments system Alipay without informing Yahoo. And the company is subject to the regulations of the Chinese government, which exerts strict control on business operations in the country. For now, U.S. investors seem comfortable with these risks.

More broadly, the blockbuster IPO marks another big success both for Chinese business and the tech sector as a whole. Eleven other Chinese companies have gone public in the U.S. this year, including Alibaba competitor JD.com. They’ve gained 40% on average from their IPO price, according to Renaissance Capital, a firm that manages IPO and ETF investment funds. Meanwhile, a cadre of startups waiting in the wings are expected to flood the IPO market before the year is up. Kathleen Smith, chairman of Renaissance Capital, says about 100 additional companies will raise $20 billion total in IPOs through the rest of the year. She projects that the total haul for the year will be $80 billion raised in public offerings, the most since the tech bubble peaked in 2000. Twenty-five percent of those funds go to Alibaba alone.

Now flush with cash, Jack Ma says his company will begin focusing its attention on foreign shores. The company launched an Etsy-like site for boutique retailers called 11 Main in the U.S. over the summer, for example. But it will be harder for Alibaba to take on giants like Amazon and eBay on their own turf. “You’re going to be going against people who have built networks in other regions,” Hottovy says. “It’s going to be difficult to become much more than a niche player in North America.”

But with less than 300 million active users in China, Alibaba still has plenty of room left to run in its own country. Whether it will live up all its hype as a publicly traded company remains to be seen. For now, though, Alibaba is basking in riches. 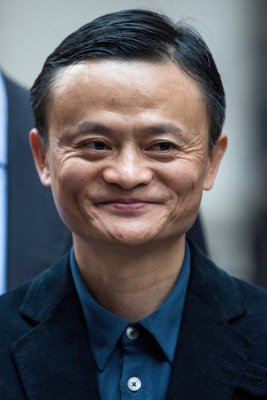 Jack Ma, Alibaba's founder, in the IPO Spotlight
Next Up: Editor's Pick