Alibaba Is Overpriced and Overhyped — So What Else Is New?

Jack Ma was lousy at math as a kid, and began his career as an English-language instructor in Hangzhou, China. He seems to have addressed that deficiency quite nicely. Ma, 50, is executive chairman of Alibaba, China’s biggest internet commerce company, which just launched an Initial Public Offering on the New York Stock Exchange that raised some $22 billion. It’s the biggest IPO on record. Alibaba’s shares were priced at $68—the high end of the range set by investment bankers—but when trading started the price jumped to $92.70. That values the company at about $232 billion, bigger than Facebook, IBM, Amazon and that tech fossil IBM. Ma’s shares are worth close to $18 billion, even after selling some $867 million in the IPO.

Alibaba does little retail business in the United States; it was originally designed to provide an online wholesale marketplace that connected Chinese companies with buyers all over the world. But the company now includes an e-Bay knockoff called Taobao that did indeed knock e-Bay out of the way in China; Tmall.com, a brands and retail platform, a cloud computing operation and other retail and wholesale businesses. “Alibaba is synonymous with e-commerce in China,” the company said in its filing statement.

And it is also synonymous with the frenetic tech IPO market in the U.S. The companied initially tried to list its shares on the Hong Kong Exchange, which would seem to be a friendly home. But its byzantine ownership structure, with Ma at the center of a web of interrelated companies tied to Alibaba, wasn’t deemed fairly structured enough to meet the Hong Kong exchange’s rules. Nor did Alibaba list with NASDAQ, always seen as friendlier to tech IPOs and to companies with multiple share classes. Instead, Alibaba listed with the old-school New York Stock Exchange. According to the NYSE, Alibaba is the 25th tech company to list its shares this year.

Except that you are not actually buying Alibaba’s shares directly, since China’s government won’t allow foreigners to control one of its most prized companies. Investors are buying shares in something called a variable interest entity that has a claim on the company’s earnings. The VIE is registered in the Cayman Islands—yes, the Cayman Islands!—that black hole of offshore money. And did I mention that Alibaba is in China. As global auto companies are learning, political risk is not unknown in that country, and even though Alibaba is a home team favorite, foreign holders are just that.

Ma is more than familiar with the way the investment cycle works, as well as the Chinese government. He was introduced to the Internet in 1995, in Seattle, and set out to become China’s web pioneer. He linked up with Yahoo co-founder Jerry Yang for a $1 billion investment 2005 that will paying off enormously for the otherwise struggling American firm. Throughout it all, he has done things his way. In this regard, Ma has a lot in common with Amazon’s Jeff Bezos and News Corp.’s Rupert Murdoch. If you are a big fan of shareholder democracy, you might have the wrong outfit in Alibaba.

All of this should tell investors to tread very cautiously. Yeah, right. Even as talk of another tech bubble keeps bubbling up in Silicon Valley, investors have demonstrated over and over that they are not going to be dissuaded from taking the plunge in the red-hot IPO pool. There are some compelling things about Alibaba. Yes, China, for one. The company’s IPO cites data claims there are 500 million mobile internet users in China and 279 million active buyers. Better yet, only 8% of all shopping is currently done online in China. And the Chinese government is not only raising wages but wants consumer spending to become a greater force in its economy.

The potential is enormous, of course, and Alibaba is not a startup. It’s a company with $7.3 billion in sales that earns actual profits. But the question for investors is always about how much you want to pay for growth. And when it comes to tech, the answer is often: too much. Alibaba may be a Chinese company, but this IPO is an all-American way for inside holders to get rich, or in Ma’s case, dynastically rich. 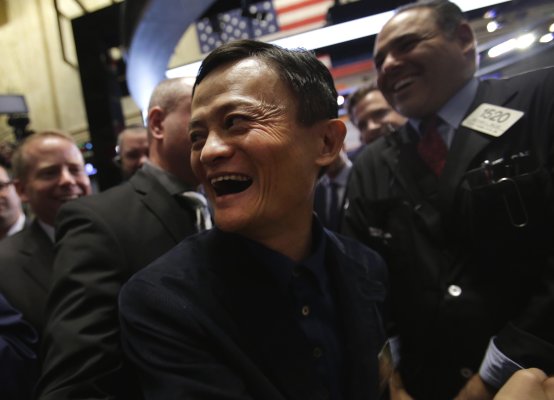