Ideas
By Jim Wallis
Reverend Jim Wallis is the founder and president of Sojourners and the author of America’s Original Sin.

It’s time to make the obvious connections. To keep focusing on consequences for national security, but ignoring the causes will create one terrorist group and war after another. Wars can only ever attack symptoms; peace requires that we deal with fundamental reasons for conflict. “Blessed are the peacemakers,” said Jesus, not the peace-lovers who keep hoping their government’s latest military strategy will work. And to hope for any lasting peace in the Middle East will mean challenging and changing the unjust oil economy we have helped to create—that not only threatens the planet through climate change, but threatens our lives and our children through constant terrorism and war.

Canon Andrew White, the “Vicar of Baghdad,” is the Chaplain of St. George’s Anglican Church in the capital of Iraq, which is now threatened by ISIS. He was in Washington this week to seek humanitarian aid and protection for the Christians and other religious minorities in Iraq who are suffering at the hands of ISIS. Over breakfast with him, I heard incredibly horrible stories of Christians being slaughtered, with most now fleeing for their lives.

White and Dr. Sarah AK Ahmed, who directs their foundation which administers aid to Iraqis, both described how Christians, Sunni, and Shia Muslims lived together in relative peace until the American invasion of Iraq. Before the war, many in the global faith community, including Pope Saint John Paul II and Christian leaders in the U.S. and the UK, warned that the bombing and invasion of Iraq could destroy and radically destabilize the country, taking many innocent lives and creating more extreme terrorism and hatred toward America across the region. ISIS is a clear result of the American war in Iraq and an occupation which failed to understand and tragically inflamed the 1,400-year sectarian conflict between Shias and Sunnis.

Now, the warhawks still want to bring another full out war back to Iraq.

But let’s give the hawks credit for some honesty. If we fail to deal with the underlying causes of extreme terrorism, their solution of serial American invasions and long-term occupations in many Middle Eastern countries is one credible response to continuing terrorism—Rome vs. the barbarians. Let’s be clear: ISIS, al-Qaida, and other terrorist groups are indeed barbarians. Yet it is the injustices of Rome and subsequent super-powers that create the grievances that help create barbarians. The early Christians certainly didn’t side with the barbarians, but neither did they side with Rome: the Christians offered another way, and other alternatives.

The modern injustices that lead to our modern barbarians lead right back to our oil economy and the repressive regimes that produce nothing, but instead just sell the fossil fuels under their sands. It’s time to be honest: the West is guilty of creating those states, of actually defining new countries and shaping the unnatural and oppressive geography of today’s Middle East. Many of these regimes are utterly corrupt, run by elites that serve their own wealth instead of their people and systematically oppress women.

As of 2010, about 55% of the population in the Middle East and North Africa is under the age of 25. Massive numbers of unemployed, uneducated, and angry young men are very vulnerable to hateful extremists who speak the rhetoric of revenge, the savage myth of redemptive violence, and the ugly distortions of religion into their ears. Injustice results in barbarians.

To ultimately “defeat” terrorism will take more than one military action after another. It will take the end of our energy dependence on the unjust oil regimes and their fossil fuels. It will take a conversion to a clean energy future and a commitment to the stewardship of God’s earth which would benefit all of God’s children.

This weekend, many of us from the faith community will gather in New York City as heads of state convene at the United Nations for a summit on climate change. We will make the faith argument for energy conservation, for ending our dependence on dirty energy for investing in clean and renewable energy, and for protecting God’s creation from the alarming and growing dangers of climate change—brought on by our use of fossil fuels.

We must also start to make it clear that overcoming our economic, political, and spiritual addiction to fossil fuels is the only way to overcome and defeat the terrorism that is such a threat to our lives, our children, and our religious freedom in the days ahead.

This will be a long term commitment that will take time. But any short and middle term strategies aimed at protecting vulnerable people and pushing back terrorist forces will only work if they go hand in hand with our long-term conversion to a new energy economy.

Jim Wallis is president of Sojourners. His book, The UnCommon Good is available in stores. 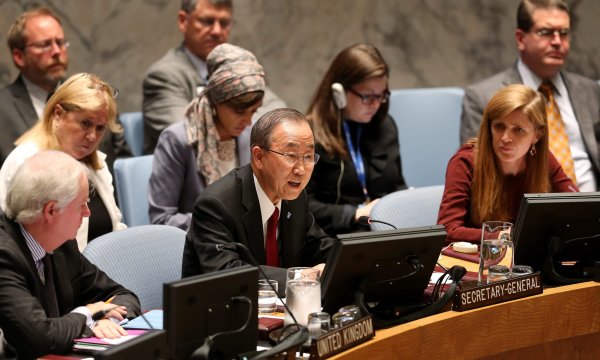 Religions for the Earth: Redefining the Climate Crisis
Next Up: Editor's Pick