NFL Commissioner Roger Goodell laid out his most sweeping response yet to a wave of domestic violence scandals on Friday, promising to punish players who commit domestic abuse and touting a new partnership with two leading advocacy groups for abuse victims.

“At our best the NFL sets an example that makes a positive difference,” Goodell told reporters in New York City. “Unfortunately over the past several weeks we’ve seen all too much of the NFL doing wrong. That starts with me.”

Goodell’s remarks followed weeks of controversy surrounding the NFL’s handling of domestic violence that has placed the commissioner in the national spotlight and led some to call for his resignation. In the most highly-publicized incident, Ray Rice was released by the Baltimore Ravens and suspended indefinitely by the NFL earlier this month after a video of the star running back hitting then-fiancée Janay Palmer in February went public. The NFL had originally suspended Rice for only two games based on a less complete video that suggested (but didn’t show) that Rice hit Palmer. Goodell apologized again Friday for his initial handling of the Rice situation.

“I got it wrong on a number of levels, from the process that I led, to the decision that I reached,” Goodell said. “But now I will get it right and do whatever is necessary to accomplish that.”

To that end, Goodell promised that a former FBI director he tapped to lead an investigation of league policies and procedures will have “full cooperation and access,” and that “any shortcomings he finds… will lead to swift action. The same mistakes can never be repeated.”

He touted new league funding for the National Domestic Violence Hotline and the National Sexual Violence Resource Center, and promised more comprehensive training for players and league personnel on the issues involved. And he pledged swifter and stricter discipline for players who behave unacceptably, citing not just domestic abuse but also child abuse and illegal use of firearms, drugs and alcohol.

“We strongly, strongly condemn and will punish behavior that is totally unacceptable,” Goodell said.

The Rice scandal embroiled the league in controversy and was quickly followed by others, including when NFL star Adrian Peterson was suspended after being charged with beating his son. Goodell said the NFL would play a constructive role in the national discussion about domestic violence, but also pointed to its own limitations, noting the importance of police and families.

“These are very complex problems, our country has a legal system that we must respect,” Goodell said.

He reiterated his insistence that the league never saw a surveillance video of Rice punching his then-fiancée until it was published by TMZ. But he also acknowledged inconsistency in league policies that has some players currently on the field while under scrutiny for domestic violence but others benched, saying it’s one of the reasons a more comprehensive league review is needed.

And he was as profusely apologetic as he has been at anytime since the scandal broke.

“I let myself down, I let everyone else down, and for that I’m sorry,” he said.

Goodell said he hasn’t considered calls for his resignation.

“I’m focusing on doing my job and doing it to the best of my ability,” he said. 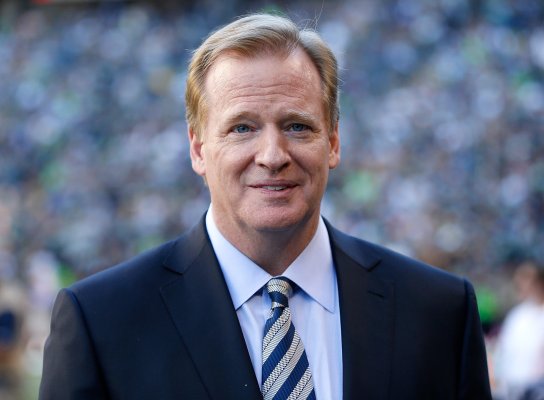 NFL to Partner With Domestic Violence Groups
Next Up: Editor's Pick