In May, 2012, when an ashen-faced Nicolas Sarkozy appeared before a roomful of crushed supporters to concede defeat to his Socialist rival François Hollande in the French presidential elections, he said: “My involvement in the life of my country will be different from now on.”

Now, it looks it might not be so different after all.

On Friday, Sarkozy finally made public what most French have assumed for months—that he would attempt to unseat the first Socialist leader France has had in 22 years by challenging the deeply unpopular Hollande in 2017. In a letter addressed to “mes chers amis” and posted on his Facebook page, he said he is “too passionate about public debate and the future of my countrymen to see them condemned to choose between today’s desperate spectacle and the prospect of hopeless isolation,” a reference to rocketing support for France’s far-right National Front. Sarkozy said the French should decide for themselves “about the strength and sincerity of my commitment to the service of France,” and characterized himself as a patriot pulled back into the fray, almost out of necessity, to rescue his nation from disaster.

Indeed, few French doubt that their country is in dire need of change. After two and half years in office, Hollande has failed to revive a severely troubled economy, whose unemployment rate, near 11%, is the highest in at least 15 years, and whose 4.3% public deficit is way above the European Union’s 3% target. Poll after poll shows Hollande’s support draining away, and one survey earlier this month put his popularity rating at 13%, the lowest of any French leader since World War II. In his twice-yearly press conference on Thursday, a chastened Hollande (whose bruises this month have included a vicious tell-all book by his former partner, Valérie Trierweiler) admitted to journalists he was struggling in office, saying, “It is not easy.” Yet he insisted he would remain in the Elysée Palace until the end of his term, rejecting a call by about 65% of voters in one recent poll that he resign the presidency.

Still, as miserable as the French are under Hollande, it is unclear that they would embrace Sarko, as the former President is known. In Friday’s letter Sarkozy said he would run for leadership of his Union for a Popular Movement (UMP) party—a necessary prelude to a formal presidential campaign. But he could face a tough task convincing the UMP that France needs him back in power. In fact, it is possible that his return could staunch the erosion in Hollande’s base, by reminding some voters that the current President might not be so bad after all.

Sarkozy was increasingly disliked—even hated—during his five-year term in office. As news filtered out this past week that he would run again, memories of that unpopularity resurfaced. The cover of one news magazine this week depicts Sarkozy as the Freddy character in the Friday the 13th horror movies, which are about a boy who is dead but keeps coming back. Sarkozy is shown in Freddy’s metal talons and black hat with the sinister headline: “SARKO 2: The Return.”

But that’s assuming he manages to mount a return. Sarkozy faces stiff competition for his own party’s nomination, including from former Foreign Minister Alain Juppé, who has recently won attention for injecting dynamism into the southwestern city of Bordeaux, where he is Mayor.

In fact, for Sarkozy, the primary race for his party’s nomination could be even tougher than his 2007 presidential campaign, which he fought against a tepid Socialist contender, Hollande’s pre-Trierweiler partner Ségolène Royal. Sarkozy won by promising dramatic economic and social changes, including cutting France’s oversized bureaucracy and scrapping laws that have stifled private-sector investment for years. In office, those plans hit a wall of resistance from lobby groups and trade unions, and many French blamed Sarkozy’s irascible style for aggravating the conflict. Voters ultimately judged him to be volatile and a bully, with a jarring fondness for expensive living. He married the wealthy singer-model Carla Bruni while in office, and a video camera once caught him on a rope line muttering under his breath to a modest-looking man in the crowd, “Piss off, poor asshole.” Overcoming this history will not be easy, and that’s before he confronts the far-right leader Marine Le Pen, whom polls currently place as the most likely winner in the 2017 presidential race.

For now, Sarkozy is trying to portray himself as a new man, someone who has polished off the rough edges and mellowed through his years in political exile. In recent photographs, he is tanned and relaxed from a summer vacation in Bali, wearing an open-neck shirt and sporting a common-man’s stubble on his chin. In his Facebook letter on Friday, he said he is not the same person he was as president, writing: “I’ve been able to step back and analyze my term in office, to draw lessons, go back to our common history, measure the vanity of certain feelings, avoiding revenge or confrontation.” The combat, however, has only just begun. 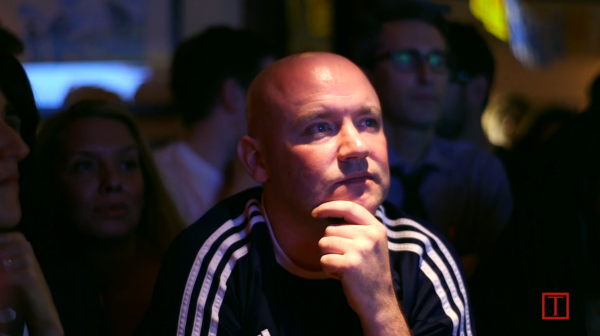 We Went to a Scottish Bar to Watch Scotland's Vote
Next Up: Editor's Pick