Beyoncé and Jay Z Aren't Really Like Bonnie and Clyde

Opening night of the "On The Run Tour: Beyonce And Jay-Z" on June 25, 2014 in Miami Gardens, Fla.
Kevin Mazur—WireImage/Parkwood Entertainment/Getty Images
By Lily Rothman

When the concert documentary for Beyoncé and Jay Z’s “On the Run” tour premieres on HBO on Saturday, the Bonnie and Clyde imagery is sure to be in full effect.

The couple have made frequent reference to the famous criminals for more than a decade now — Jay Z’s song “03 Bonnie & Clyde,” on which his now-wife was featured, came out in 2002. They have returned to that imagery in promoting their latest tour, as with a short film called Bang Bang, the first part of which they released earlier this month. But the film’s director, Dikayl Rimmasch, told Nowness that the allusion to the infamous criminals is not meant to be a literal one: “…it’s not that we’re Bonnie and Clyde,” he quotes Jay Z as saying. “We’re on the run from everything. On the run from becoming a cliché. On the run from doing the same thing again.”

Which is a good thing! Because the musical power couple has very little in common with the real-life criminal couple.

As TIME reported in the June 4, 1934, issue, Clyde Barrow and Bonnie Parker Thornton weren’t just the us-against-the-world couple made famous by the 1967 movie based on their story. Cigar-smoking Bonnie had a tattoo of the name of her husband, Roy Thornton, who was in jail in Texas while she went on a spree with Clyde. Clyde “[found] sport in shooting down, without provocation, people who got in his way — filling station men, constables, plain citizens.” The two of them and their accomplices were named in 12 murder cases. When they were gunned down by police in May of 1934, their car contained a dozen guns, a saxophone, a half-eaten sandwich and $507.

Meanwhile, the Carters are a regular presence on the Forbes list of the most powerful couples in the world. And, considering that last year they were in first place for celebrity-couple earnings, they have way more than $507 and somebody’s old lunch. Their most recent potential brush with crime involved a trip to Cuba to promote educational and artistic exchange, but that didn’t end up being a crime in the first place, as the trip turned out to have been approved by the U.S. government in advance.

But, to be fair, it does turn out that the two couples have more in common than metaphor. Though Bonnie and Clyde never turned to songwriting, at least not that we know, the former did have a way with words. After their death, the following poem by Bonnie was found with her possessions:

However, TIME noted, Parker’s prediction only came half true: they were buried a mile apart. 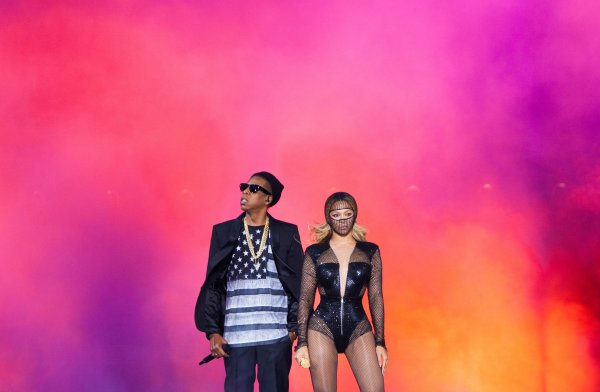 Beyoncé and Jay Z Go Out With a <i>Bang Bang</i>
Next Up: Editor's Pick