Slavery Matters More Than Ever

Ideas
By John Matteson
John Matteson is a Distinguished Professor of English at John Jay College of Criminal Justice, City University of New York. He is the Pulitzer Prize-winning author of Eden's Outcasts: The Story of Louisa May Alcott and Her Father, and will teach a free online course on “Literature and Law of American Slavery” beginning September 30.

Those of us who have been shaken by George Zimmerman’s killing of Trayvon Martin and by the more recent brutality and riots in Ferguson, Mo., are far from the first Americans to lose sleep over the issues of racial violence and inequality in America. When Thomas Jefferson, that paradoxical slaveholder who proclaimed the equality of all, realized that government compromise could not dispel the problems of slavery and race, he wrote that his fears awoke him “like a fire bell in the night.” Two generations later, during the Civil War, Moby-Dick author Herman Melville stood in the night on his Manhattan housetop as he watched the city burn. The riots had begun when white citizens, outraged by the new draft law, turned their fury upon their black neighbors. “No sleep,” he wrote, “The sultriness pervades the air / And binds the brain.” It seemed to him that civilization was dissolving: that mankind was falling “whole aeons back in nature.”

The New York City draft riots were far worse than the revolt in Ferguson. In them, 120 people died. And yet today, 150 years after the Civil War, the fire bells still ring, and we need to ask why. Part of the answer, as I explore in my Mass Open Online Course on the Literature and Law of American Slavery, is that, while American law has changed dramatically, some of our attitudes continue to resist reforming. These attitudes have not only to do with race itself, but with the role we are willing to give our governments in regulating our behavior.

Slavery, as various commentators have seen, was a form of privatized law enforcement. Slavery gave slaveholders an array of powers — the right to punish, to incarcerate, and, in some instances, even to kill — that normally belonged only to the State. The owner did what he thought necessary to preserve order and obedience, and the government looked the other way. As in the famous North Carolina case of State v. Mann, which held that shooting a slave was not a crime, the South talked itself into believing that its private system was actually benevolent and that any attempt “by a Judiciary tainted with a false and fanatical philanthropy” to interfere would unleash an evil “more wicked and appalling” than the one it desired to amend. The resistance to government control persists in our own time. The kind of “Stand Your Ground” law that governed the Trayvon Martin case is a return to the idea of privatized law enforcement; like slavery, it shifts the authorized use of violence into private hands. Supporters of George Zimmerman understand one thing clearly: that freedom is precarious when separated from the power to defend it. Yet arbitrary power over life and death is terrible, and terrible is the law that authorizes any person who carries a gun as a potential judge and executioner.

What, then, if the person who wields the gun, as in Ferguson, wears a uniform? One must sadly admit that, throughout our history, the State has been a less than perfect guardian of the lives and liberties of all its citizens. The revolution in our constitutional law that followed the Civil War did more than free the slaves. The Fourteenth Amendment, for the first time, guaranteed all Americans equal protection of the laws and declared that no state could deprive anyone of life, liberty, or property without due process of law. The amendment intentionally nullified the Dred Scott decision, in which Chief Justice Roger Taney infamously declared that blacks in America had “no rights which the white man was bound to respect.” Yet the early history of the Fourteenth Amendment was notably perverse. A series of Supreme Court cases construed the Amendment so narrowly as to give the rights of minorities almost no protection, while tacitly affirming that the Amendment did confer the rights of citizenship on corporations. For generations, equal protection remained only a ghostly presence in the law. The courts did nothing to eradicate the practice of treating blacks as second-class citizens. And the habit grew ingrained.

In our own time, the interpretation of the Constitution has markedly changed, as have the opinions of all but a tiny fringe of Americans. By law, and by consent so automatic that we don’t even think of it, we all share the same restaurants, the same hotels, the same colleges. Equality is, for most of us, not only a legal principle but an article of our national faith. But in moments of passion, anger, and fear, that faith can still be tragically suspended. The doctrine of Chief Justice Taney, obliterated from the law, returns in the form of impulse and adrenalin. And in some dark hearts, perhaps Taney’s words have remained law all along. In Ferguson, the ghost of Dred Scott is still there.

John Matteson is a Distinguished Professor of English at John Jay College of Criminal Justice, City University of New York. He is the Pulitzer Prize-winning author of Eden’s Outcasts: The Story of Louisa May Alcott and Her Father, and will teach a free online course on “Literature and Law of American Slavery” beginning September 30. 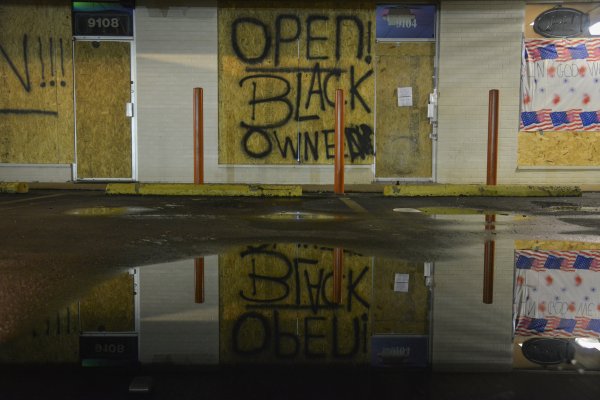