Scotland's Vote Signals Big Change for the U.K. — and Europe

At 7.30 am on Sept. 19, the Prime Minister of the still united United Kingdom appeared on the doorstep of 10 Downing Street. “The people of Scotland have spoken. It is a clear result,” said David Cameron, and it was: 55% in favor of the union against 45% for Scottish independence. “They have kept our country of four nations together. Like millions of other people, I am delighted.”

But the Conservative Party leader didn’t stop there. Ahead of the referendum, the three main parties in Westminster — Cameron’s Conservatives, their Liberal-Democrat coalition partners, and the opposition Labour Party — had joined together to make a series of pledges to Scottish voters. In return for Scotland’s fealty to the union, there would be a fast-tracked process to ensure a further devolution of powers to the Scottish Parliament on tax, spending and welfare. And the formula by which public spending is allocated by the U.K. Treasury to Scotland, Wales and Northern Ireland would remain unchanged. In other words, Scotland’s population of 5.2 million would continue to enjoy public spending that is $2,671 higher per person than in England. (The Guardian offers an explainer here about how and why the formula disadvantages the English.)

With Scotland now secure within the union, Cameron — pink cheeked and bright eyed despite a sleepless night — issued a fresh pledge, of “a balanced settlement — fair to people in Scotland and importantly to everyone in England, Wales and Northern Ireland as well.”

How might such a settlement be possible with Scots getting more from the public purse than their counterparts South of the border? The answer, as prominent members of his own party have already pointed out, is that it might not be.

But Cameron’s vision of fairness revolves not around funding mechanisms but British constitutional arrangements. “Just as Scotland will vote separately in the Scottish Parliament on their issues of tax, spending and welfare so too England, as well as Wales and Northern Ireland, should be able to vote on these issues and all this must take place in tandem with, and at the same pace as, the settlement for Scotland,” he said.

At first glance this appears a political masterstroke. The U.K. faces a general election in May 2015, with polls showing a lead for the Labour Party. Cameron’s move not only seizes the initiative — putting him firmly at the helm of a Big Idea to make Great Britain greater — but it potentially damages his rivals too. The Conservatives are deeply unpopular in Scotland and hold only one Westminster seat there. Labour, by contrast, has 41 Scottish MPs. If those Labour MPs were no longer able to vote on English-only issues, a Labour majority at a general election could count for nothing on day-to-day votes in the House of Commons.

The promise of English devolution also steals thunder from a party that in many respects poses a greater threat to the Conservatives than Labour: the United Kingdom Independence Party (UKIP), which campaigns on greater rights for English voters and also channels many of the sentiments that were in play in Scotland. UKIP appeals to voters who believe that the best way to protect self-interest against the sorts of global forces that saw subprime mortgage lending in the U.S. trigger a series of financial and economic crises across the world is to repudiate big alliances in favor of more localism. In May, UKIP gained more votes than the Conservatives and Labour in the elections to the European Parliament — the first time in British modern history a national poll was lost by both of the largest parties.

Though UKIP snatched votes from both parties, the Conservatives have most to fear, because UKIP’s strongly euroskeptic, anti-immigration line not only appeals to many traditional Tory voters but has also opened splits in the Conservative Party. It was in an effort to hold his party together that Cameron in January 2013 suddenly promised an in-out referendum on the U.K.’s membership of the European Union before the end of 2017. This is a promise Cameron can only keep by winning the forthcoming general election.

His gambit in the aftermath of the Scottish referendum appears to bring that prospect closer. But that depends on his being able to match grand words with grander deeds.

One reason the U.K. system enshrines so many obvious unfairnesses it that any change to the system requires the consent of that system. Cameron needs to find consensus in both the House of Commons and House of Lords and among political parties that will understand only too well how the deal he is proposing could damage them. There is also the problem that in fixing one unfairness, it’s easy accidentally to create another.

Whatever happens, it now seems likelier that U.K. voters will eventually get a say on E.U. membership. Either Cameron will prevail in his audacious bid to overhaul Britain’s democracy, providing a fillip to Tory chances, or — and more likely — the spectacle of the three main parties squabbling among themselves will deliver a fresh boost to UKIP, in turn pushing mainstream parties to become more euroskeptic. As Scotland has just demonstrated, increasing numbers of people believe smaller is better. The Scottish referendum may have strengthened one union but it has quite possibly weakened another. 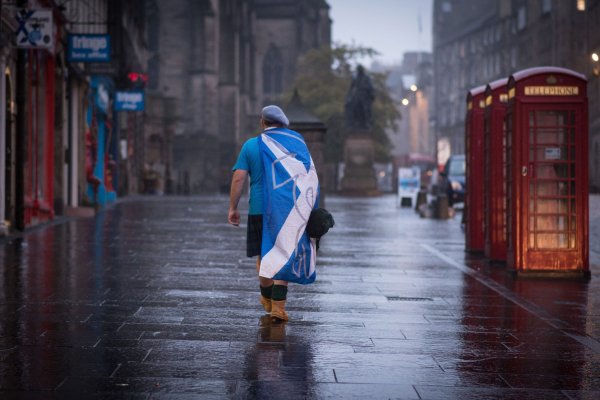 Scots Begin to Reconcile
Next Up: Editor's Pick