Republicans across the country are crying poverty six weeks before the midterm elections.

From the pages of the Wall Street Journal to meetings of GOP lawmakers, top party operatives and political figures are sounding the alarm about the Republican Party’s fundraising as the battle for the Senate enters its final weeks. The National Republican Senatorial Committee has been consistently outraised and outspent this year by the Democratic Senatorial Campaign Committee, and a Democratic super PAC, Senate Majority PAC, has proven to be a potent foil to the mass of Republican outside groups.

The battle cry “we are losing” is not unlike the spate of Democratic email solicitations this year warning that “all hope is lost” if donors don’t kick in.

On Wednesday, former George W. Bush political guru Karl Rove penned a column in the Journal warning that “each passing day provides evidence as to why a GOP Senate majority is still in doubt.” In a private donor conference call Thursday morning, the U.S. Chamber of Commerce warned more than 250 donors that the GOP could spoil its best chance at taking the Senate if they don’t pony up. “This is a fight between environment and cash,” National Review quoted former House Speaker Newt Gingrich as saying. “If cash can win, the Democrats will do okay. If environment wins, they’ll do poorly.”

In fact, Republicans are openly praising the Democratic money machine.

“You’ve got to give credit to Harry Reid and his teams’ aggressive fundraising, including using the President an unprecedented number of times this summer,” said Scott Reed, the Chamber’s top political strategist. “Every time they land the plane it’s $3-4 million.”

One Republican operative intimately involved in Senate races credited the Democrats’ focus on motivating donors earlier in the cycle, so that the party could make television reservations earlier stretch its resources further. “They freak them out and they get the money in early,” the operative said. “In 2010 we had all this money left over because our donors came in so late.”

An analysis by the Rove-backed super PAC American Crossroads found that Democratic candidates and outside groups have reserved $109 million in television advertising through election day, while Republican have reserved $85 million. Indeed, over the past two cycles Democrats have made their dollars more effective by taking advantage of early television reservations to earn lower rates. GOP groups are hoping concerns over that disparity will drive more donations.

“Republicans have the best class of candidates in the best political environment in decades – it would be a shame to let Democrats steal it because of a financial advantage,” said NRSC spokesman Brad Dayspring, whose organization has raised $29 million less than its Democratic counterpart. “That’s why we’re working overtime to prevent that from happening.”

But the dire picture Republicans are painting doesn’t fully meet reality. Democrats contend that in the 11 most competitive races, Republicans are the ones outspending Democrats $153 million to $130 million, with the DSCC continuously warning of the deep pockets of the industrialist Koch brothers.

There are indications the poverty campaign is working. Politico reported that billionaire casino magnate Sheldon Adelson contributed $10 million to Rove’s nonprofit group Crossroads GPS this week, with more potentially on the way. 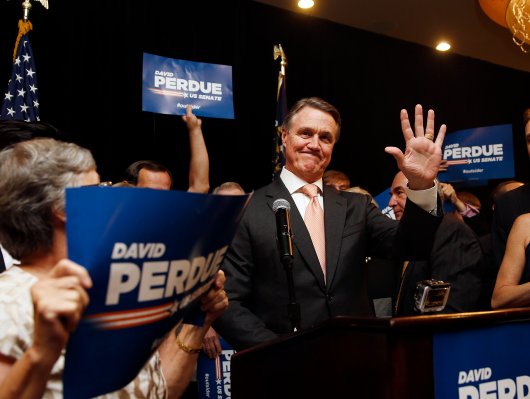 Georgia Senate Race Becomes a Battle of the Bushes
Next Up: Editor's Pick