Scotland Heads to the Polls to Vote on Independence

Voting is underway in Scotland’s historic independence referendum Thursday, and the atmosphere at the polls is electric. Scots began lining up to vote before the polls even opened at 7 a.m. BST (2 a.m. ET), to have their say on whether Scotland should stay in the U.K. or become an independent nation. And with over 4.2 million people registered to vote, a historically high turnout is expected.

While one member of the Scottish parliament praised the vote’s “precious democracy” and early participation rates, concerns over rising hostility in the independence campaign led one senior pro-union Better Together source to predict “absolute carnage” on polling day. Jackie Baillie, another member of the Scottish Parliament, tweeted a photo of one polling place bearing the graffiti “Vote Yes or Else!” and criticized the behavior of those “trying to threaten and intimidate” voters. Still, the official in charge of the referendum vote counting told The Guardian she had “no concerns” about disruptions, and early reports suggest voters are “turning out in good numbers and good humor,” with one voter calling the atmosphere “friendly.”

The historic vote marks the first time in British history that 16- and 17-year-olds can cast their ballot, and plenty of young voters turned up before the school day began. There have been older first-time voters too — with 97% of Scotland’s electorate registered to make a yes-or-no choice in the referendum, political apathy has been cast aside for the vote. Excluding undecided voters, the latest Ipsos Mori poll shows a slight strengthening of the No lead – 53% to 47% in the Yes camp. Still, this poll also shows that 4% of voters are still undecided as some Scots turned up at polling stations only to decide to return in a few hours. That means both sides of the debate are continuing to campaign for votes.

“I’ve watched all the debates but you get no answers,” Angela Colquhoun, a 41-year-old nursing auxiliary voting in the referendum, told The Guardian. “People are scared about what’s going to happen. They might vote no to stick with the known, but that’s not a good enough reason.”

On Wednesday evening, it wasn’t just party leaders and Scottish activists trying to make their voices heard. People around the world took to Twitter ahead of the referendum – from Scottish tennis leader Andy Murray, who boosted the Yes campaign by criticizing “no campaign negativity,” to U.S. President Barack Obama urging the U.K. to remain “strong, robust and united.”

2,609 polling places are open Thursday and will close at 10 p.m. local time, or 5 p.m. ET. Anyone still in line at this time will be allowed to cast their vote, but counting will begin almost immediately. Votes from some of the more remote regions of Scotland – particularly islands off the coast – will be collected by helicopters and boats, but bad weather could delay the receipt of these ballot boxes. Recounts will only be allowed at a local level if there are concerns about the voting process. Results from the first local authorities will start rolling in at 2 a.m. local time, but the final announcement is expected between 6:30 and 7:30 local time Friday morning. 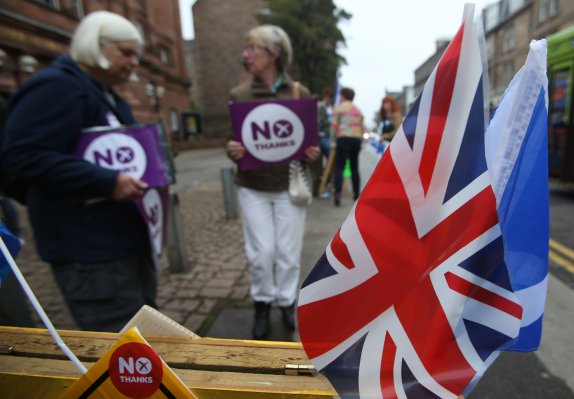 Watch Europe's Borders Change Over 114 Years
Next Up: Editor's Pick