10 Things Teens Really Need to Know Before They Leave Home

I’ve had a problem with the word core ever since the day a personal trainer told me that I had one and that it really needed strengthening. Thus ensued months of boring and painful exercises, until both my trainer and I gave up. It seems that like Mother Earth herself, I have a unique core. And it’s molten. So I stopped doing crunches and planks, and now the earth is spinning smoothly on its axis again. Goodbye, core worries.

But here we are, in autumn, when a mother’s fancy turns (not so lightly) to thoughts of another problematic core–that is, the new Common Core curriculum standards. This particular mother thinks, Should I worry? Which really just means: Do I have to care about this fill-in-the-blank issue that all the other parents are so worked up about, or is it like teething or teenage rebellion, something that will sort itself out eventually whether I lose sleep over it or not?

I have been taking the teething-and-teenage-rebellion approach ever since I heard about the Common Core, but unfortunately for uninterested me, it’s becoming unignorable. Just this morning I saw that the NBC affiliate in Buffalo has produced a series of videos to help parents understand first-grade math homework. People, has it really come to this? I mean, it makes sense that my 16-year-old would be able to outsmart me and my prying eyes on Snapchat, but shouldn’t I still have some small advantage over my second-grader in the math department?

You see, that’s the real problem with the Common Core: it makes well-meaning parents look stupid when we already have a whole world of social media to do that for us.

So to reclaim control in my little corner of the parental world, I am proposing my own set of Common Core standards for teenagers. These will not help your children get into college, but they will help them become better people. And none of them requires watching a video from the NBC affiliate in Buffalo.

Hello, class of 2015! Congratulations–you’re almost there! And your parents are so proud of you! Although not as proud as they will be once high school is over and you’re out of their hair, what with your eye rolling, unpredictable comings and goings and constant requests for small personal checks made out to the PTA in annoying amounts like $13.65.

There’s just one little thing. In addition to all those incomprehensible Common Core requirements the grownups have been droning on about, you need to be able to do the following in order to get your high school diploma:

1. Write a letter. An actual letter that does not begin with “Hey” and is written, in handwriting, on real paper.

2. Learn to cook a good meal that can feed the entire family, no matter what size family you have. According to the 2010 U.S. Census, the average American household has 2.58 people. One nice chicken roasted on a bed of vegetables might even provide leftovers.

3. Hold down an unpleasant job that makes you hate your parents a little bit because they won’t let you quit. When I was your age, I worked as an intern on Capitol Hill and on an assembly line in a Westvaco paper-box factory. Guess which job taught me more about life. (Although I did find myself alone in the hall one afternoon with Senator Sam Nunn and he actually said hi to me, which was superthrilling.)

4. Go somewhere for the weekend without your phone, just so you know what it feels like to be in solitary confinement, or dying.

5. Every time you get a new toy or gadget, give an old toy or gadget away to someone who doesn’t get new things as often as you do.

6. Take care of someone or something other than yourself. A pet does nicely here. And if it’s a dog, learn to brush the dog far enough away from the back door that the hair does not all come whooshing back in when you are finished. Yes, I speak from experience.

7. Write a heartfelt thank-you note to someone over the age of 70. Even if this person hasn’t given you a holiday or birthday present, find something to thank them for.

8. Read a book for pleasure. If you start one and still hate it on page 50, find another one. Repeat as needed until you find a book you really love.

9. Do something nice for a neighbor without expecting any credit for it. Rake the leaves, shovel the walk, put the newspaper on the front step if it landed in the middle of the driveway. Keep your identity here secret.

10. Don’t race to the top. Never race to the top. If you want to aim for the top, good for you. But try to get there slowly, deliberately, without knocking everyone else out of the way. Or missing the beautiful view. 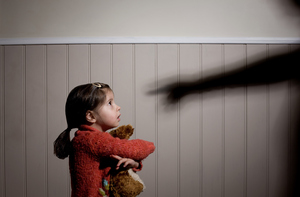 Hitting Your Kids is Legal in All 50 States
Next Up: Editor's Pick