Medical personnel inside a clinic take care of Ebola patients in the outskirts of Kenema, Sierra Leone, on July 27, 2014
Youssouf Bah—AP
By Elizabeth Barber

Sierra Leone has begun a three-day nationwide lockdown as it struggles to contend with the Ebola virus’s unprecedented, lethal thrust across West Africa.

Citizens of Sierra Leone, among the nations worst hit by the epidemic, will be banned from leaving their homes from Thursday to Sunday, the Guardian reports. During that time, health workers will travel from house to house, identifying cases, and about 21,000 police and soldiers will be deployed to keep people off the streets.

Officials in Sierra Leone have said that the lockdown would help contain the aggressive Ebola virus, which is spread through contact with bodily fluids. The disease has so far killed 2,453 people across Sierra Leone, Liberia and Guinea, and the World Health Organization (WHO) on Tuesday projected the outbreak’s toll could reach 20,000.

However, some medical officials have drawn parallels between the lockdown and the quarantines imposed elsewhere in West Africa, including in a Liberian slum where similar restrictions fueled riots and have since been lifted. Food shortages and the abandonment of sick neighbors are other possible consequences, they fear.

“It has been our experience that lockdowns and quarantines do not help control Ebola as they end up driving people underground and jeopardising the trust between people and health providers,” Doctors Without Borders said in a statement. “This leads to the concealment of potential cases and ends up spreading the disease further.”

The group also expressed concern that the roving health workers would not be equipped to accurately diagnose Ebola during the home checks and that, even when cases are identified, Sierra Leone still lacks the resources to care for more sick people.

The WHO says that about $1 billion is needed to tackle Ebola — but nations, organizations and donors have in total pledged just $838 million to fighting the crisis, and just $155 million of that sum has in fact been delivered, TIME reported on Wednesday.

The U.S government, which has pledged $500 million of that total sum, said on Tuesday that it would also set up a command center in the Liberian capital of Monrovia, sending in about 5,000 members of the armed forces.

In a speech at the Centers for Disease Control and Prevention’s headquarters in Atlanta, U.S. President Barack Obama said the Ebola epidemic had “profound security implications,” calling it “a potential threat to global security if these countries break down, if their economies break down, if people panic.”

On Wednesday, U.N. Secretary-General Ban Ki-moon said his organization was preparing to launch a ground mission in the affected countries. The U.S. has also circulated a Security Council draft resolution that instructs member states to send support, including medical personnel, to West Africa, the New York Times says. 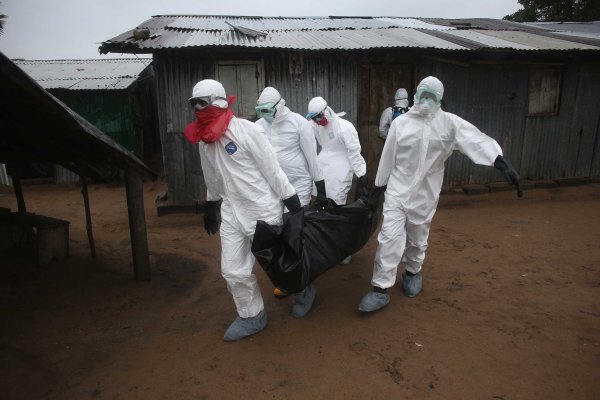