When Did 'Shylock' Become a Slur?

On Tuesday, Vice President Joseph Biden referred to those who make bad loans to members of the military, to take advantage of them while they’re overseas, as “Shylocks.” He was speaking on the occasion of the 40th anniversary of the Legal Services Corporation, a nonprofit that helps fund legal aid.

The word “shylock,” which has been used to refer to loan sharks, is an eponym from a Jewish character in Shakespeare’s The Merchant of Venice. Jewish Americans have publicly challenged the portrayal as an insult to Jews for more than 50 years, according to a review of TIME’s archive, even as it remained a fixture of the modern lexicon. Today, “shylock” is considered an antisemitic slur and, after being called out by the Anti-Defamation League, Biden apologized for his “poor choice of words.”

But the vice president’s apology has confused some — perhaps because the term was, not too long ago, considered by many to be appropriate for public usage.

A quick survey of TIME’s archives reveals 119 articles that use the word. Many of those are articles about The Merchant of Venice and Philip Roth’s book Operation Shylock — but the last time it was used casually, without reference to the character, was in a 1977 story about the mafia: “A new soldier starts at the bottom, breaking in as a senior thug’s driver, bodyguard or shylock debt collector.”

Go back further and the references begin to increase in volume. Until the 1950s, it was not uncommon to see a reference to “Uncle Shylock” when the U.S. government was judged to be stingy.

But those usages, despite their commonness, weren’t necessarily inoffensive.

In 1962, Joseph Papp, who started New York City’s Shakespeare in the Park, chose The Merchant of Venice as the first play for the new theater. “The New York Board of Rabbis loudly protested,” as TIME reported during the controversy. “In the part of Shylock, said the rabbis, Shakespeare had perpetrated ‘a distortion and defamation of our people and our faith.” Through WCBS-TV, the entire city would have a chance to see the performance, and that was what bothered the rabbis most. ‘The television audience will be a mass audience,’ they argued. ‘It will include impressionable young people and teenagers, and many of its adults would not pass muster on the score of intellectual maturity.’ Rabbis across the city took up the theme.”

Concern about Shylock wasn’t new in the ’60s either. Writing in the journal Engage, slang lexicographer Jonothan Green has noted the word was listed in a 1950s collection of “schoolyard wit and wisdom” as a taunt for Jews. (Green also notes that the word doesn’t start to appear to mean a loan shark until the 19th century.)

The question of whether Shakespeare and the play The Merchant of Venice are antisemitic — or if Shakespeare was merely recording the views of his time, and perhaps even encouraging others to think twice about those views — continues to be debated. But few, if any, would be flattered to be compared to a greedy usurer best remembered for demanding “a pound of flesh” as loan repayment. In the play, Shylock and his Jewish identity are closely linked; the character perpetuates a stereotype via a syllogism that could be seen to imply that Shylock is Jewish and Shylock is bad and therefore Jews are bad. That logical leap has been possible to make throughout the four centuries since the play was written.

In short, “shylock” has long been considered offensive — but that didn’t stop its casual use in conversation and print at least into the 1970s. 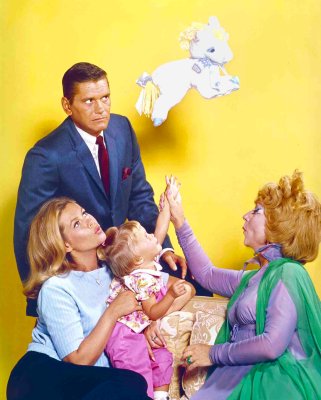 5 Things Producers Didn't Want You To Know About Bewitched
Next Up: Editor's Pick