In case you wanted proof of your waning youth, Thursday marks the 10th anniversary of Britney Spears and Kevin Federline’s wedding — a day when a promising young pop star and a dude nicknamed “Meat Pole” decided to throw caution to the wind and say “I do.”

“Ten years — it totally freaks me out,” says wedding planner Alyson Fox, reflecting on the September 18, 2004, nuptials. The day marked Fox’s first (and only) celebrity wedding. While it was originally planned as a big October wedding at the Bacara in Santa Barbara, things rapidly changed after the paparazzi figured out the date and location. Fox was left with about 10 days to organize a completely new, surprise wedding — and, not trusting any other venue to keep the secret, she held it at her own house.

Most Britney fans probably don’t celebrate her short-lived marriage’s anniversary; some even see it as a key moment in a downward spiral from which she has only recently recovered. Still, though Britney filed for divorce in 2006, Fox holds that marriage dear.

TIME: Britney and Kevin Federline’s engagement was huge. Did you think that this would be one of the biggest weddings-
Alyson Fox: —of my career? Yes, I mean, she is Britney Spears. I first interviewed with Felicia, her assistant for years, and I didn’t know who I was meeting with, just that it was a VIP… I met Britney and her mom the next day and they all couldn’t be nicer. The sweetest. I mean they’re from the South. Britney’s so polite, she kept calling me Miss Alyson, and I was like, ‘Oh my God don’t do that; that makes me feel old.’

And then you met Kevin.
They were like any young couple. Very much in love, very touchy feely.

What was the original wedding going to be like?
They came up with a list of 200 to 250 people, and we thought the Bacara would be great. We were designing the most beautiful but not over the top, elegant but shabby chic, gorgeous but fun event… It was a really fun experience. I have not one negative thing to say until we had to move the whole wedding.

So what happened?
A publication printed the location and date of the wedding. I got a call from a very unhappy Kevin. [Unhappy at the situation not her.] Even though I told them that we had the best security team and it could still go on without a hitch, they didn’t want 100 million people standing outside trying to take pictures, ruining the intimacy and privacy of that event. So we had to go to Plan B, and we had to do it fast.

You had a “Plan B”?
Well, we planned it in 10 days or less… Everything was already in the works, Monique Lhuillier was making all the gowns that were basically ready, all the vendors were in place for the big wedding — we just didn’t have a location. In that week we decided we can’t do it at a hotel, we can’t do a venue because people were going to know. We limited the guest list to the two families and the wedding party, and then we talked to Britney and Kevin about doing a surprise wedding. Nobody would know.

Not even Britney’s mom?
No. Nobody knew… We told everyone and our vendors we were having an engagement party. We tried to use every vendor we could who was going to help at the wedding.

And you would throw it at your house in Studio City?
Well, their place wasn’t ready yet… The vendors made the house look stunning. It was so beautiful. I only wish they could have had more people… Every person who walked in that night, we handed then an invitation, they opened it up and it said “surprise!” you are here for the wedding and not the engagement party. And we would direct them to the room where they would change into their gowns and tuxedos…

Tuxedos? I thought the men were wearing those white Juicy velour jumpsuits…
No! That’s what they left the house in. They were in tuxedos and gowns. Everybody made such a big deal about that, but that’s what Juicy did for every celebrity who got married. They’d send them the cute little tracksuits. I asked Britney and Kevin what they wanted printed on the back, and Britney said, “Maids! Maids will be cute!” And it was. It was cute! And he said “Pimps” which was adorable… People are closed-minded. It was a joke, it was for fun. It was Juicy tracksuits! 10 years ago people would have given anything for a Juicy tracksuit.

You must not have gotten a lot of sleep that week.
Oh I didn’t sleep that week. And I didn’t sleep the week after, because there were all these stories going on [at the time] that they weren’t really married, and all this B.S. People are going to think what they’re going to think, but I know the truth. They were wonderful people and I’ll say that until the day I die. To this day I don’t talk to a lot of people about it because I still feel protective over them. Unfortunately it didn’t work out — but what is it, 60% of marriages that don’t?

Read TIME’s 1999 profile of Britney Spears here, in the archives: A Sweet Sensation 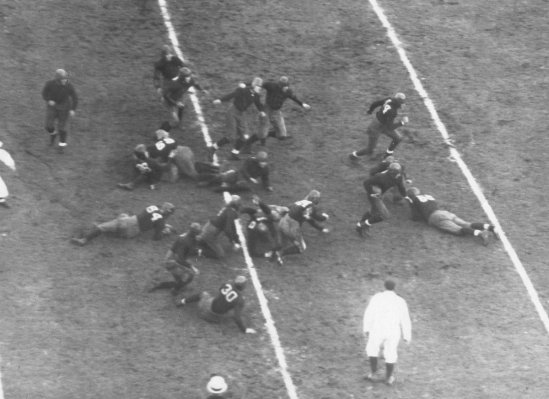 The Deadliest Football Seasons on Record
Next Up: Editor's Pick