President Barack Obama redrew a firm line in the sand for his military planners Wednesday, saying he won’t send any American combat troops to take on the militant group Islamic State of Iraq and Greater Syria (ISIS)—under any circumstances.

His comments, at U.S. Central Command at MacDill Air Force Base in Florida, come a day after Chairman of the Joint Chiefs of Staff Gen. Martin Dempsey said he would consider recommending that the President deploy U.S. ground troops should the current air campaign and Iraqi efforts fail. “If we reach the point where I believe our advisers should accompany Iraq troops on attacks against specific [ISIS] targets, I’ll recommend that to the President,” Dempsey said, instantly setting Washington aflame and sending the Obama Administration into damage control mode.

White House Press Secretary Josh Earnest and a spokesman for Dempsey said he was clearly talking about a hypothetical, but Obama made clear that in all circumstances his answer will be the same.

“One of the things we’ve learned over this last decade is America can make a decisive difference,” Obama said. “But I want to be clear: The American forces that have been deployed to Iraq do not and will not have a combat mission.”

Obama said more than 40 countries have pledged to be part of the international coalition against ISIS, but didn’t announce any direct commitments to join in airstrikes against the militant group. “We can’t do it for them, but this is an effort that calls on America’s unique abilities and responsibilities to lead,” Obama said. “In a world that’s more crowded and more connected, it is America that has the unique capability to mobilize against an organization like [ISIS].

“We’ve always known that the end of the war in Afghanistan didn’t mean the end of threats or challenges to America,” Obama said.

Speaking to a roomful of troops at CENTCOM, Obama highlighted the role the U.S. can play in the world, both in taking on militant groups and humanitarian crises, in some of his most vocal statements in support of American leadership on the global stage in recent years. 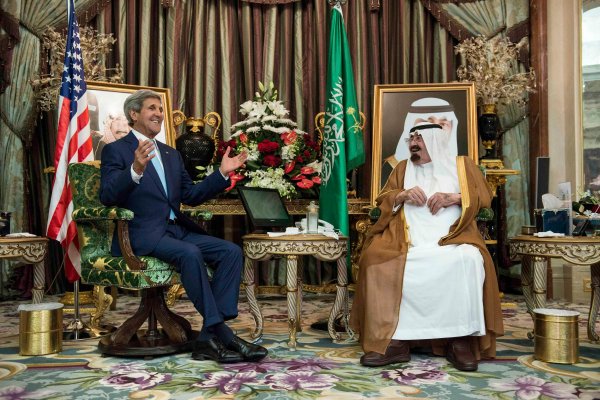 Kerry Enlists Saudi King in War of Ideas Against ISIS
Next Up: Editor's Pick