With the input of more than 100 people living with HIV, the Centers for Disease Control and Prevention (CDC) launched a new ad campaign today called “HIV Treatment Works.” The message: If you’re HIV positive, get treatment early and stick with it.

Many people don’t immediately start or stay on medication for a variety of reasons, including the cost of the drugs, poor access to health care, a lack of knowledge about effective treatments, and stigma about the disease, says Dr. Nick DeLuca, Chief of the Prevention Communication Branch in the Division of HIV/AIDS Prevention at CDC. Of the 1.1 million Americans living with HIV, only 1 in 4 have an undetectable viral load, the CDC says, which means that the viral levels in their blood are suppressed and are unlikely to be transmitted to other people. At least some of that rate, the CDC says, is due to a lack of adherence to medication.

Though antiretroviral therapy requires daily medication and frequent doctor visits and blood draws, it’s highly effective. “We know that if we get individuals living with HIV on treatment early, it’s the best thing to improve their individual health,” DeLuca says. People who start and continue treatment are 96% less likely to transmit it to others, and they’re less likely to get sick themselves because of improved immune function.

About 50,000 Americans per year contract HIV, a rate that’s remained steady since the mid-1990s. Of the new infections, 44% are African-Americans; black males are especially at risk. About a quarter of all new infections happened in people between ages 13-24. 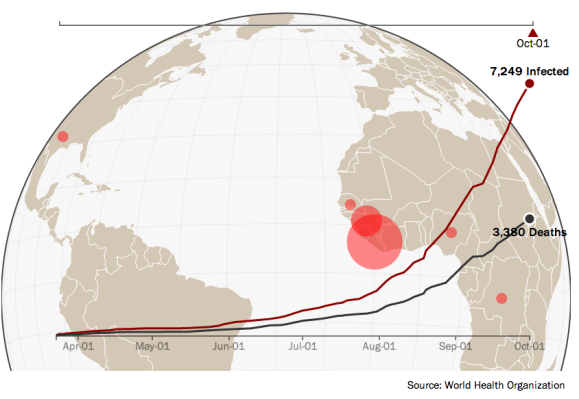 Watch How Ebola Has Spread
Next Up: Editor's Pick