Lear personnel during a raid on an illegal trespassing marijuana operation.
Lear
By Alex Altman

On a recent Sunday, a local gardening club gathered with their local sheriff in Laytonville, Calif., a hamlet of 1,227 people in Mendocino County, America’s cannabis cultivation capital. By some estimates, up to 90% of the town’s residents are tied to the pot industry, and the event was a chance to ask about the county’s enforcement policies. Instead, some members of the community wanted to talk about a rumor that had been making the rounds.

Over the summer, residents claimed men in military gear had been dropping onto private property from unmarked helicopters and cutting down the medicinal pot gardens of local residents. Local law enforcement have conducted helicopter raids in the area, but some worried the culprit this time was different: a private-security firm called Lear Asset Management.

The confusion was easy to understand. In the wildlands of California’s pot country, the workings of law enforcement are hard to track, and the rules for growing pot are often contradictory. To add to the mess, the various local, county, state and federal enforcement efforts don’t always communicate with each other about their efforts. The added possibility of private mercenaries, with faceless employers, fast-roping from helicopters raised alarm bells for many farmers.

Founded in 2012, Lear (the name stands for Logistical Environmental Asset Remediation) is a creature of the area’s unique cannabis culture. The company employs about 15 people, who are mostly former military: ex-U.S. Special Forces, Army Rangers and other combat veterans. They fly out on rented helicopters, wearing camouflage fatigues, body armor and keffiyehs around their necks. They are hired by large land owners to do the work of clearing trespass gardens from private property, and perform forest reclamation, sometimes funded by government grant. Deep in the woods, they cut down illegal pot plants and scrub the environmental footprint produced by the backwoods drug trade. They carry AR-15 rifles, lest they meet armed watchmen bent on defending their plots.

Paul Trouette, Lear’s CEO, says his firm was not responsible for the helicopter raids that the town’s residents complained about. “We do not do any kind of vigilante, black ops, Blackwater stuff,” he says, noting the company is licensed and regulated by the state of California, and only works on private land when summoned by the owner. Trouette is neither cop nor soldier; he is a longtime Fish and Game commissioner in Mendocino County, and the head of an organization devoted to preserving local herds of blacktail deer. Security contracting, he says, grew out of volunteer environmental reclamation. “It was a natural for our company to move into security contracting,” he says. “It’s just too much to handle for private ownership.”

The firm’s business model is rooted in the region’s complicated relationship with weed. Rich Russell, the commander of Mendocino’s major crimes task force, has estimated that about half of the county’s residents work in the marijuana economy. Many longtime growers are remnants of the back-to-the-land movement of the Sixties, who operate within the county’s legal cultivation limits. But the county’s dense forests and ideal cultivation conditions have also been a magnet for more dangerous elements.

In recent years, small bands of criminals colonized the county’s forests, concealing grow sites on vast parcels hidden deep in the woods. In 2011, Operation Full Court Press—a three-week raid jointly carried out by local, state and federal anti-drug agencies—netted some 632,000 marijuana plants in and around the Mendocino National Forest, with a street value in the neighborhood of $1 billion. Illegal growers have a record of shooting at hikers and law enforcement; in 2011, a former local mayor was killed while looking for a marijuana plot.

The perps also produce environmental disaster. They strew trash through the woods, poison wildlife and pollute streams. The environmental devastation is an even greater problem this year. As California copes with a crippling drought, thirsty pot plants from illegal gardens are sucking up the water supply, creating a “holocaust” for fish, Trouette says.

More recently, the trespass grow sites have migrated from public land onto the vast plots owned by private citizens and timber companies. Some of them have hired Lear to deal with the problem. The company has run about nine missions across California’s pot country this year, with more planned this fall, Trouette says. And while the company’s special-ops aspect gets much of the attention, most of the work focuses on environmental reclamation.

While some of Mendocino’s challenges are unique to the region, others highlight the legal tangle that threatens the industry’s growth at a moment when boosters are trying to take marijuana mainstream. Residents are permitted to cultivate up to 25 marijuana plants for medicinal use, about four times the standard for much of the rest of the state. Federal law still prohibits pot, classifying it as a Schedule I drug on part with heroin and ecstasy. The clashing statutes produce a patchwork system of justice, with enforcement sometimes varying from county to county even within states where medical or recreational marijuana is legal. Federal money-laundering law prevent most legitimate pot businesses from banking their proceeds, forcing them to endure the safety hazards and logistical hassles of handling huge sums of cash.

In Mendocino, officials have tried to sort out the murkiness. In 2012, an experimental program that attempted to license legitimate cannabis cultivation under the supervision of the county sheriff was shut down under pressure from the local U.S. Attorney. Meanwhile, the county district attorney has pioneered a controversial program that offers reduced sentences for certain growers who are willing to pay hefty restitution charges: $500 per pound of seized pot and $50 per plant. While the approach has helped clear a case backlog and restocked the department’s coffers, critics say it allows wealthier clients to purchase leniency.

Reports of vigilante marijuana raids on private property may simply stem from a lack of legal clarity. Under the so-called “open fields doctrine” set forth by the U.S. Supreme Court, the Fourth Amendment does not protect undeveloped property from warrantless searches. As a result, police may be permitted to cut down private gardens without a warrant.

In the meantime, Lear has flourished, despite the concern among some local growers. But like most people in the Emerald Triangle, Trouette thinks the best thing for the locals would be for the feds to sort out all the confusion. “I think the federal government would do everybody a big favor,” he says, “by regulating this industry.” 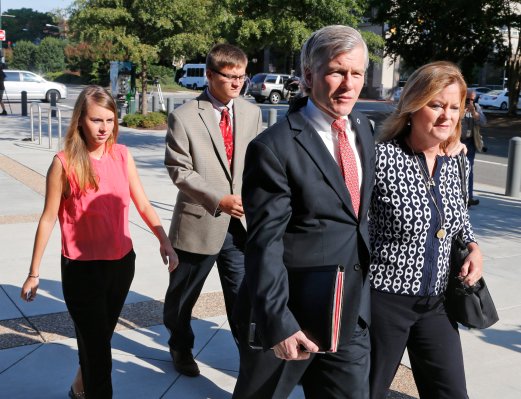 Former Virginia Governor Guilty of Corruption
Next Up: Editor's Pick