A Washington Redskins helmet sits on the grass during a preseason football game between the Redskins and Cleveland Browns at FedExField on August 18, 2014 in Landover, Maryland.
TJ Root—Getty Images
By Maya Rhodan

Senator Maria Cantwell (D-Wash.) said Tuesday that she would soon be introducing legislation to end to the NFL’s tax-exempt status because of its refusal to pressure the Washington Redskins to change the team name.

“The NFL needs join the rest of America in the 21st century. We can no longer tolerate this attitude towards Native Americans,” Cantwell, a member and former chairman of the Senate Committee on Indian Affairs, said Tuesday. “This is not about team tradition; it is about right and wrong.”

Cantwell joined tribal leaders and lawmakers at a press conference on Capitol Hill hosted by the Change the Mascot campaign. It’s been a year since the Oneida Indian Nation launched the Change the Mascot ad campaign against the Washington Redskins. On Tuesday, the campaign announced they would continue pressing the NFL to get urge Redskins owner Dan Snyder to reconsider the Washington team’s mascot and call on other team owners to join the effort to get the name changed.

In an open letter being sent to every NFL team owner, the Change the Mascot campaign says “the league is promoting this racial slur with the resources of every team, including yours, which makes it a league-wide crisis.” The letter continues, “If owners like you finally stand on the right side of history and publicly demand action, the NFL can and will change the team’s name.”

The coalition calling for a name change has grown over the past year, with lawmakers including President Obama speaking out against the Washington team’s name. Broadcasters and publications have agreed to not use the term. And earlier this summer a federal agency canceled the team’s trademark because of its use of a racial slur, though the Redskins organization has appealed that decision.

Through it all, however, Washington Redskins owner Dan Snyder has said repeatedly he will not change the team’s name or mascot. “I respect the opinions of those who disagree. I want them to know that I do hear them, and I will continue to listen and learn. But we cannot ignore our 81 year history, or the strong feelings of most of our fans as well as Native Americans throughout the country,” Dan Snyder wrote in a letter to fans last October. 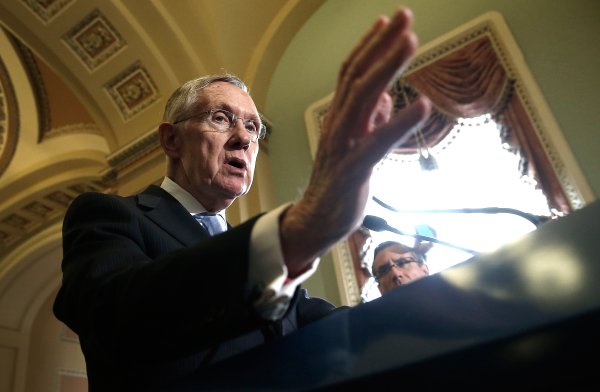 Top Lawmakers Confident Bill To Train and Equip Syrian Rebels Will Pass
Next Up: Editor's Pick