The nation’s top military officer fired tracer rounds at President Obama’s vow not to send U.S. troops back into ground combat in Iraq Tuesday during his testimony on Capitol Hill. In fact, Army General Martin Dempsey, chairman of the Joint Chiefs of Staff, did it three times in his testimony before the Senate Armed Services Committee.

And while he caveated what he told the panel about the escalating fight with the Islamic State in Iraq and Greater Syria, his message was clear: if the U.S.-led effort to defeat ISIS and oust it from its self-proclaimed Islamic State straddling the Syrian-Iraq border falls short, Dempsey will go back to the Oval Office and ask Obama for a green light to send at least a limited number of American ground-combat forces to help get the job done.

What was striking was how he delivered the message. Pentagon officials are forever saying they won’t speak in “hypotheticals”—things that might happen in the future—yet Dempsey dropped an atomic what-if into his opening statement. “If we reach the point where I believe our advisers should accompany Iraq troops on attacks against specific ISIL targets,” he said, “I’ll recommend that to the President.”

Minutes later, Senator Carl Levin, D-Mich., chairman of the committee, asked Dempsey if having Syrian and Iraqi forces fighting ISIS on the ground was the best approach, “to avoid a Western ground force in a Arab or Muslim country?” Dempsey said Levin’s assessment was true, then added: “But if it fails to be true, and if there are threats to the United States, then I of course would go back to the President and make a recommendation that may include the use of U.S. military ground forces.” Both Dempsey and Defense Secretary Chuck Hagel told the panel that ISIS already represents a threat to the U.S.

Then Senator Jack Reed, D-R.I., followed up by asking Dempsey what might warrant U.S. troops getting involved in ground combat on Iraqi soil. The general responded by citing the key mission facing the Iraqi security forces: retaking Mosul, Iraq’s second-largest city, from the ISIS. “If the Iraqi security forces and the [Kurdish] Pesh [merga fighters] were at some point ready to retake Mosul—a mission that I would find to be extraordinarily complex—it could very well be part of that particular mission to provide close combat advising or accompanying for that mission,” he said. In other words, he’s likely to make such a request.

Dempsey’s acknowledgement that a limited number of U.S. ground troops might be necessary to achieve mission success—he said he wasn’t talking about “armored divisions with flags unfurled” headed into Iraq—triggered questions for White House Press Secretary Josh Earnest, who made clear the President was sticking to his guns. “The President does not believe that it would be in the best interest of our national security to deploy American ground troops in a combat role in Iraq and Syria,” Earnest said after Dempsey testified. “That policy has not changed.”

By dinnertime, Dempsey’s spokesman had issued a statement trying to clean up the mess. “While we have advisers on the ground in Iraq today, the chairman doesn’t believe there is a military requirement for our advisers to accompany Iraqi forces into combat,” Air Force Colonel Ed Thomas said. “The context of this discussion was focused on how our forces advise the Iraqis and was not a discussion of employing U.S. ground combat units in Iraq.”

The Presidential pledge has riled serving and former military officers, who believe little is to be gained by unilaterally removing military options from the table. “I think the President made a big mistake in publicly saying he would not put boots on the ground,” says Anthony Zinni, a retired Marine general who led U.S. Central Command from 1997 to 2000. “Why tell the other guy what you won’t do?”

Senator Joe Manchin, D-W.V., doesn’t think Zinni’s question is relevant. He told Dempsey and Hagel about what he’s hearing from West Virginians. They want to know, he said, how a renewed U.S. war effort in the region—after spending 13 years, $1.6 trillion and 6,600 U.S. troops’ lives in Afghanistan and Iraq—would make things better. 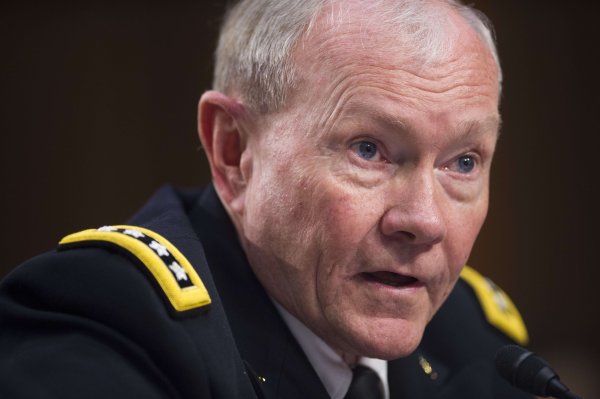 General May Recommend Troops for ISIS Fight
Next Up: Editor's Pick