Seats rest inside the Manned Dragon V2 Space Taxi in Hawthorne, California, U.S., on Thursday, May 29, 2014.
Bloomberg—Bloomberg via Getty Images
By Dan Kedmey and Jack Linshi

Proposals by Boeing and NASA were selected by NASA to ferry astronauts to the International Space Station (ISS), with the goal of certifying crew transportation capability by 2017, NASA Administrator Charles Bolden said in a news conference.

“These contracts highlight what commercial companies can accomplish and we are counting on them to deliver our most precious cargo: the crew who will perform vital science research on the ISS,” Lueders said. “Two contracts give us the necessary mechanisms to assure we’re on the right track.”

Once NASA approves that Boeing’s and SpaceX’s systems meet its requirements, the systems will be certified for two to six human missions to deliver cargo and a crew of up to four to the ISS. The missions will enable NASA to nearly double today’s scientific research potential, Lueders said. The capsules will also serve as a “life boat,” capable of holding crew members safe up to 210 days in the event of an emergency.

Bolden emphasized that the contracts are intended to end by 2017 America’s sole reliance on Russia, whose government charges the U.S. $71 million a seat for rides to the ISS. NASA had previously been able to transport crew to the ISS with its Space Shuttle, but retired the vehicle in 2011. Its replacement craft, the Orion, isn’t set for manned missions until after 2020.

A third contender in the space race, Sierra Nevada, did not secure a piece of the deal with its winged spacecraft, the Dream Chaser. Boeing, with its decades of experience supplying parts and expertise to NASA, was widely considered a favorite among the three companies vying for the NASA contract. SpaceX founder and billionaire Elon Musk had previously criticized Boeing for being too close to NASA. 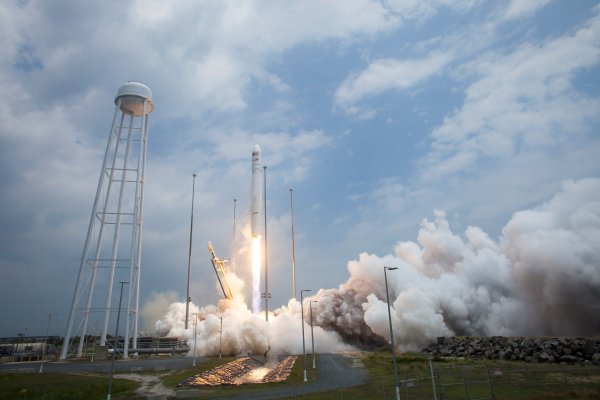 Watch a 3,500-Pound Spaceship Burn Up in the Atmosphere
Next Up: Editor's Pick