The man who calls himself David Collins (Dan Stevens) is a blond, smiling Mr. Manners. Invited to stay at the Petersons’ home after saying he was a comrade of their late soldier son Caleb, he addresses parents Spencer (Leland Orser) and Laura (Sheila Kelley) as “Sir” and “Ma’am.” Driving daughter Anna (Maika Monroe) home from a party, he insists that she “please put on your seat belt.” And at a roadside bar, he beats up some teenagers who have bullied young Luke Peterson (Brendan Meyer), then courteously gives the barman a couple of big bills, “for the damages.” David is such a gentleman that, when he feels obliged to knife one of the Petersons, he murmurs, “I’m sorry.” He’s almost the psycho killer you’d want your daughter to marry — except he’s trying to kill her too.

Part of the sick-kick fun of The Guest, a hometown horror film written by Simon Barrett and directed by Adam Wingard, is not just in the transposing of clichés from old movies about deranged Vietnam veterans to the posttraumatic fallout of the Iraq and Afghanistan campaigns. The rest is in the casting of Stevens, possibly the best-behaved English actor of his generation, as the virulent American vet. (In another of this week’s thrillers, A Walk Among the Tombstones, he extends his career makeover as a Brooklyn drug trafficker.) The 31-year-old Stevens, who read English at Cambridge, quickly became a fixture on Brit TV playing elegant gents in adaptations of Jane Austen, Agatha Christie and Henry James. He is best known to American audiences as Matthew Crawley, Lady Mary’s sainted husband on Downton Abbey.

(READ: James Poniewozik on why he’s too American to love Downton Abbey)

Matthew, you may recall, also had a rough soldiering: he was injured and paralyzed in World War I, only to experience the miraculous recoveries and karmic misadventures that befall handsome heroes in the better class of soaps. The deportment of his David in The Guest is again impeccably charming; those dimples could seduce a scorpion. And his stay with the Petersons, still grieving their elder son’s death in action, at first has the therapeutic effect that Matthew worked on the Abbey. He not only dispatches the bullies who have hounded Luke at school, he encourages the lad to fight back; when Luke does, and gets in trouble, David talks the principal into reducing the sentence from expulsion to a month of detention. He’s Luke’s own private Clint: a Dirty Harry (and, we soon learn, man with no name) but soft-spoken and smiling.

The troubling wrinkle in this guard dog with a spaniel puppy’s demeanor is that he goes a little too far in protecting his new family. After Father Spencer mentions that he’s stuck in a middle-management job, his boss mysteriously disappears, which puts Dad in charge. Anna argues with her boyfriend Zeke (Chase Williamson), and soon a gun is planted in Zeke’s truck, implicating him in the murder of a friend. The would-be David carries a switchblade knife — “just in case” — that he gives to Luke, with this avuncular advice: “They take your knife, you burn down their house with their family inside.”

Wingard and Barrett’s previous genre entry, You’re Next, was a traditional if vivacious home-invasion slasher film. The Guest has bigger, broader ambitions: to turn a soldier with PTSD into a compelling horror-movie monster, with the stitching of sympathy around the edges. What, we wonder, was the “medical experiment” implied by an intervening military cop (Lance Reddick) that made its subjects “programmed to kill,” like low-rent Jason Bournes? “I considered it my mission to assist you all while I was here,” the man who isn’t David tells Mrs. Peterson. “There were just too many complications.”

Too many to explain, anyway, since at the climax the un-David must stalk through a haunted-house maze that conjures up memories of both the John Carpenter Halloween and Orson Welles’ The Lady from Shanghai. But it’s best not to overthink any B movie, especially this one. The Guest ravels smartly; and, after too many herky-jerky entries in the faux-found-footage subgenre, it’s nice to see a scare film with a pearly visual style, which gives the enterprise the patina of both elegance and plausibility. The final frisson is Stevens’ winsomely understated performance as the fiend in any Gulf War family’s nightmares. With a psychopathic method beneath his good manners, he is a Downton Abbey demon — a Matthew Skin-Crawly. 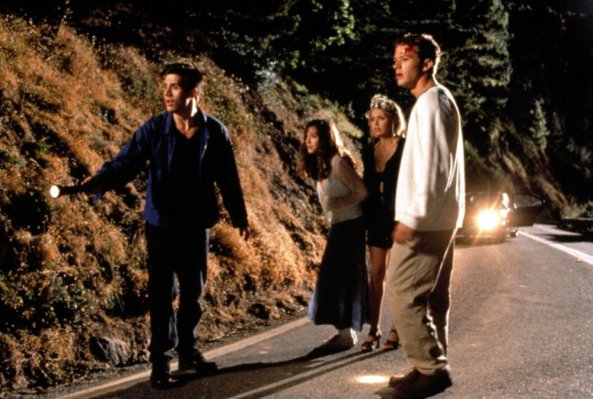 I Know What You Did Last Summer Reboot in the Works
Next Up: Editor's Pick