Dramatic footage obtained by CNN shows Christians in the southeastern Chinese city of Wenzhou barricading themselves into their church to keep hundreds of riot police at bay and save their church cross from confiscation.

Since the beginning of the year, Communist Party officials have been demolishing churches in surrounding Zhejiang province, and removing crosses from tops of church buildings, ostensibly because they are “illegal structures.” However, the move is thought to be part of a crackdown on the growing popularity of Christianity.

The city of Wenzhou is a Christian stronghold.

Members of the congregation of the Salvation Church have been guarding the gates to the church for two months, reports CNN.

In July, the church’s CCTV footage captured police beating protesters and dragging them away.

“What the government here is doing is so barbaric,” said a local church leader Chen Zhi’ai to CNN.

Analysts say that the rising popularity of Christianity in China is seen as a threat to the Communist Party.

“Christianity has been growing very rapidly in China in the last several decades,” Fenggang Yang of Purdue University in Indiana told CNN. “There is very little sign that it is slowing down.”

Christians in Wenzhou, a city dubbed the Jerusalem of China, say they are facing the worst suppression in decades and many residents are living in fear.

“The leaders think Christianity is a foreign religion and it is part of a foreign culture, which they define as ‘Western’ culture,” says church leader Chen. “They see our growth as an invasion of Western culture into China.” 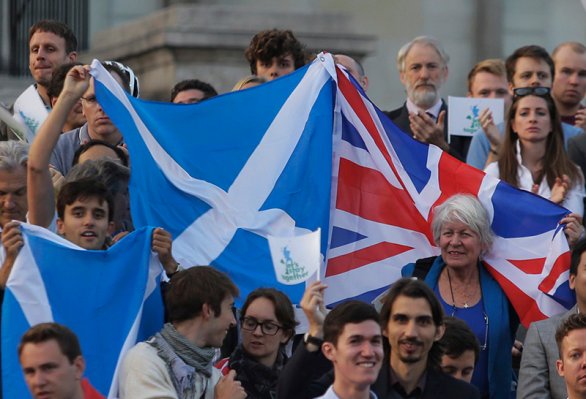 British Politicians Make Final Push to Save Union
Next Up: Editor's Pick