U.S. military advisers are on the ground in Iraq to advise Kurdish Peshmerga fighters like these, taking on ISIS on Monday, but not to do any actual fighting themselves.
JM Lopez—AFP/Getty Images
By Mark Thompson

So it’s a relatively tiny force. But just what are these troops doing? More importantly, what are they not doing?

The Pentagon insists that they’re not going to engage in ground combat against the Islamic State in Iraq and Syria (ISIS). They’ve spent much of the last three months—the first 300 advisers began arriving in Iraq in late June—assessing the strengths and weaknesses of the Iraqi army and the Kurdish peshmerga forces in the semi-autonomous north of the country. ISIS militants steamrolled over Iraqi forces earlier this year, culminating in their seizure of Mosul, Iraq’s second-largest city.

The U.S. advisers also are coordinating surveillance flights over ISIS targets in Iraq and Syria, and coordinating the growing U.S. military footprint inside Iraq.

As the assessment phase ends, about a dozen teams of 12 U.S. military personnel each are embedding with the headquarters of brigade-sized and larger Iraqi units—outfits with thousands of troops. Their goal is to advise and assist the Iraqis on how to best battle ISIS. Assigning them to higher headquarters units is designed to keep the Americans away from the front lines and out of harm’s way.

“What we’re starting to see now, thanks in part to the assistance not only that the United States has given, but other countries, we’re starting to see the Iraqi security forces meld and form into much more capable fighting force than they were,” Rear Admiral John Kirby, the Pentagon spokesman, said Friday.

But as the number of troops increases, their roles will expand, Army General Martin Dempsey, chairman of the Joint Chief of Staff, told reporters in July. “We will match the resources we apply with the authorities and responsibilities that go with them based on the mission we undertake,” he said, “and that is to be determined.”

The Obama Administration has taken pains to explain that “no boots on the ground” inside Iraq actually means “no boots on the ground engaged in combat” inside the country. The line begins to blur when it comes to missions like calling in U.S. airstrikes. Many such attacks are best directed by someone on the ground near the target, ideally by a fellow American fluent in language, lingo and lethality. But it’s not as important as it used to be.

David Deptula, a retired Air Force lieutenant general who ran the air war over Afghanistan in its early days, says the aircraft now flying over Iraq and Syria are far more advanced than earlier models. “If you’re trying to halt the movement of ISIS forces, you don’t need somebody on the ground to tell you where they are,” he says. “Any combat aircraft can now observe the battlespace and can find, fix and engage in real time. Aircraft today—even though they go by the same names as in 1991’s Gulf War—are many times more capable because of advances in intelligence, surveillance and reconnaissance capabilities, communications capability, and the ability to network and share information.”

But U.S. special operators are valuable in this kind of fight. Ford Sypher deployed three times to Iraq and twice to Afghanistan as a team leader with the Army’s storied 75th Ranger Regiment between 2006 and 2010. He thinks he saw U.S. troops in action on the ground in northern Iraqi town of Zumar earlier this month:

…Sypher wrote in a Daily Beast dispatch. But the Pentagon told Sypher that “there are no U.S. troops on the ground in or around Zumar.” The Pentagon, and the Obama Administration, would be lying to the nation if those were U.S. troops Sypher witnessed. That’s seems a political gamble not worth taking.

Far more likely that the “visibly Western” fighters he saw were either CIA (including loaners from Defense Intelligence Agency, who technically become CIA operatives for the assignment) or contractors (employed under a contract like this one, but not made public)—who used to be members of the U.S. military. 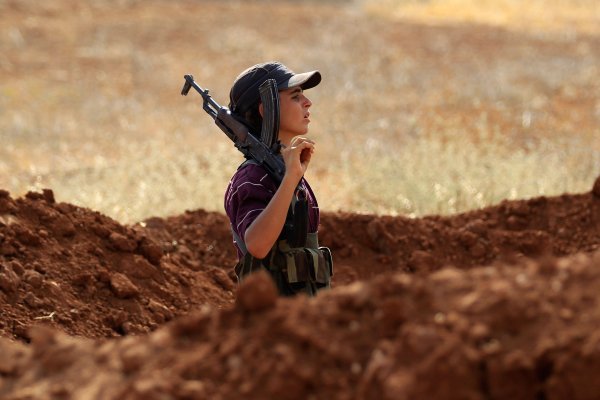 House Panel Seeks to Permit Obama to Train and Equip Syrian Rebels
Next Up: Editor's Pick