The 19th season of Dancing with the Stars gets underway tonight with the usual melange of ostensible stars like Back to the Future’s Lea Thompson, NASCAR’s Michael Waltrip, MMA champ Randy Couture, YouTube sensation Bethany Mota and professional hunk Anthony Sabato Jr. While these celebrities may be skilled in the ring, on the track or on the screen, they are not professional dancers (save for Alfonso Ribeiro, who invented The Carlton). To prepare them for the battle, each star is paired with a pro — and after 19 seasons, some of the pros have become bigger stars than the so-called stars with whom they are partnered. (Say that five times fast).

This season, former pro Julianne Hough completes the circle of life (insert your own Lion King joke here) and joins the judges’ table to assess the skills of her former colleagues and their new charges. Plus, a brand new pro joins the elite squad of dedicated dancers: Keo Motsepe. One seasoned vet, Val Chmerkovskiy, chatted with TIME about what to expect from this season of Dancing with the Stars from a pro’s perspective.

This season, Chmerkovskiy is paired with Janel Parrish, known for her role on ABC Family’s Pretty Little Liars. “I had not seen Pretty Little Liars before,” says Chermkovskiy. “I’m aware of the show though, because all my friends went crazy when I told them who I was paired up with. Now I’ve watched a few.”

Parrish is one of the younger contestants on the show and, after a stint with in the National Touring Company and Broadway Company of Les Miserables as Little Cosette, it’s clear she has stage chops. “Janelle is one of those kids who grew up having a natural flair for performance,” says Val. “She did singing and acting, but musical theater was the thing she really loved to do. She took some dance classes to complement that. She knows how to move and has some stage presence and she kept up with it, so she has been introduced to dancing before, but has never worked on ballroom dancing in her life.”

Still, Chmerkovskiy is aware that with their resumes, people expect them to go far in the competition. “I am humbled by the fact that people have a lot of expectations for her and myself. I want to surpass those expectations,” he says. When asked if he thinks he and Janel have it in them to take home the Mirror Ball Trophy this year, he diplomatically replies: “I think everybody on the show should think that way about their partners and their opportunities.”

But Chmerkovskiy prefers a more zen approach to the competition: “I’m not obsessing about the result as much as the process. I want to make this season great for her.”

When asked about the competition, Chmerkovskiy admitted he has a little crush on one of the other contestants. “Tommy Chong is one of my favorite celebrities of all time. I never fangirl over anybody, but Tommy Chong is definitely my man crush this season. He’s awesome,” Chmerkovskiy says. “He has a great sense of humor and I’m sure he and Peta [Muragatroyd] get the munchies all the time.”

“Every partner has their strengths, and our responsibility as professionals is to recognize those strengths and capitalize on them, choreographically. You have to translate that chemistry on the dance floor and make their personalities shine,” says Chmerkovskiy, before noting something that avid fans know to be true: “The best dancers rarely win the show.” When pushed, Chmerkovskiy demurs. “I don’t know! I try to do my very best and hopefully that comes through, first to my partner, second of all with Dancing with the Stars, my employer, and third of all with the fans. Who they vote for is not something I can control.”

“Last year, Meryl [Davis] was clearly the best dancer on the show, and we saw the best dancer win,” said Chmerkovskiy. “But was it her incredible dancing or was it her journey with my brother, Maks — or something about their chemistry? I’m aware that it’s not just the dancing show, but the chemistry, the journey and the growth. I’m focused on that and going to bring that out this season.”

As for who he thinks will shine this season, it’s all about The Fresh Prince. “Alfonso Ribeiro is a great performer and I’m sure he’s going to be a highlight,” said Chmerkovskiy. “I don’t know about any single individual because we need to wait for the first show. But now, judging from the interaction we’ve had, everyone on the cast is amazing. I’ve never been this excited for a season before.” 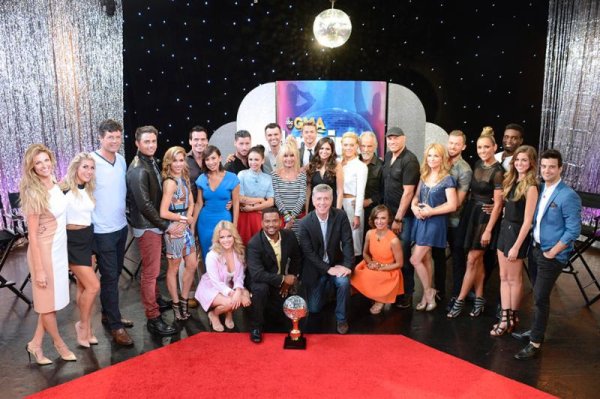