The Global Problem With Overdiagnosis and Overtreatment

It’s a public health conundrum: Current screening guidelines lead to an overdiagnosis of diseases like cancer, which results in overtreatment for ailments that might never seriously impact a person’s health.

We’ve heard the overdiagnosis argument in the U.S. before, especially surrounding breast cancer; in 2009, the United States Preventive Services Task Force recommended against annual breast cancer screening starting at age 40 and instead advised women get mammograms starting at age 50.

Now, two new studies published Monday in the medical journal The BMJ highlight the global problem with overtreatment in both breast cancer and heart disease.

In a new analysis report, a team of researchers conclude that hypertension is being overtreated in people with mild cases of the disease. The researchers write that about 40% of adults worldwide have hypertension, and more than half of those people have mild cases of the disease (meaning they’re low risk and don’t have existing cardiovascular disease). But more than half of people with mild hypertension are being treated with blood pressure-lowering drugs–even though the research on whether this reduces cardiovascular-related disease and death is not established. The researchers argue that the practice is unnecessary and costs $32 billion each year in the U.S. alone.

Instead of recommending lifestyle modifications proven to work, like cutting back on alcohol and exercising more, many doctors opt for drugs because they want to do something right away without having to rely on the often-unhealthy environment beyond their office walls, says study author Vikas Saini, president of the Lown Institute. “[Doctors] need the confidence that we have systems in place that encourage a healthy lifestyle,” he says.

“Most doctors feel a little under siege; they see blood pressure rising and weight going up and they want to do something, but they know they have huge headwinds,” says Saini. “Prescribing a pill is the path of least resistance, but it’s a lot of money.” According to the researchers, the clinical treatment for mild hypertension needs to shift away from a heavy emphasis on drugs.

The second study adds to a growing body of research that supports later initiation into breast cancer screenings. The study authors argue that screening older women over age 70 for breast cancer doesn’t offer enough benefit to be worth it.

In 1998, the upper age limit for breast cancer screening in the Netherlands was extended from age 69 to age 75. The researchers wanted to see if the change actually resulted in fewer late-stage cancers among 70 to 75 year olds, so they looked at about 25,500 new breast cancer patients in a Dutch cancer registry between 1995 to 2011. What they found was that early-stage breast cancer in women 70 to 75 rose sharply after the screening recommendations changed, and while the number of new cases of advanced-stage breast cancer fell significantly, the absolute decrease of those cases was small. For every advanced-stage cancer detected by screening among women over age 70, about 20 “extra” cases were also diagnosed, the researchers concluded.

“Those numbers need to be told to women,” says study author Gerrit Jan Liefers, a surgical oncologist at Leiden University Medical Centre. “We are not voting against screening, but you should individualize your screening to women. To use it as a population-wide tool is wrong. You end up screening women who would never be affected by the cancer.”

The message both studies send to doctors is that physicians need to consider each patient individually and inform men and women of their options.

The two studies are part of the 2014 Preventing Overdiagnosis Conference in Oxford. The BMJ has also launched a “Too Much Medicine” campaign you can follow here. 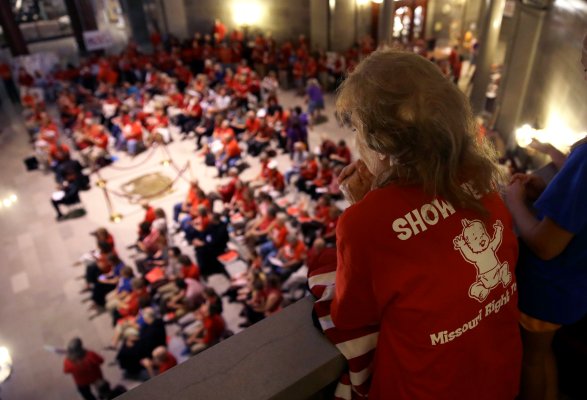 What Missouri's New Abortion Law Means for Women
Next Up: Editor's Pick