Kerry Enlists Saudi King in War of Ideas Against ISIS

Saudi King Abdullah listens to U.S. Secretary of State John Kerry before a meeting at the royal palace in Jeddah, Saudi Arabia, on Sept. 11, 2014
Brendan Smialowski—Reuters
By Michael Crowley / Jeddah

On the night of Sept. 11, John Kerry arrived at the royal palace here for a meeting with the King of Saudi Arabia. Abdullah bin Abdulaziz makes his home in this coastal city during the summer months, and the palace is a testament to his country’s vast oil wealth. Kerry entered through a vast atrium beneath a towering powder dome perhaps a hundred feet high. To greet the King, he ascended a carpeted staircase beneath a huge chandelier, and into a grand sitting room where his majesty awaited. The elderly monarch, clad in brown robes and white headscarf, remained seated as Kerry leaned down to kiss his cheeks.

To say the least, Sept. 11 is an awkward date for an American official to be visiting Saudi Arabia. Many consider Abdullah’s government at least indirectly culpable for the terrorist attacks on that day in 2001, thanks to the Saudi kingdom’s generous financial support for Sunni fundamentalists whose harsh, Salafist version of Islam helped to spawn al-Qaeda. “Saudi Arabia created the monster that is Salafi terrorism,” writes Ed Husain of the Council on Foreign Relations. Some suggest even more direct responsibility: former Senate Intelligence Committee chairman Bob Graham believes “there was a direct line between at least some of the terrorists who carried out the Sept. 11 attacks and the government of Saudi Arabia.”

But there was no sign of discomfort and certainly no mention of the date as the U.S. Secretary of State and the Saudi King bantered genially, via a translator, through a short photo opportunity before getting down to business. The U.S.-Saudi diplomatic relationship has long since moved on from Sept. 11. Today, Washington considers King Abdullah a crucial ally in the fight against Islamic terrorism in general — and against the Islamic State of Iraq and Greater Syria (ISIS) in particular. During his whirlwind diplomatic tour to assemble America’s coalition against ISIS over the past week, Kerry repeatedly stressed the King’s role in a growing effort to undermine ISIS’ religious legitimacy in the Muslim world. “We are fighting an ideology, not a regime,” Kerry told reporters traveling with him on Monday.

Kerry is so animated by this war of ideas that he calls it even more important than the military campaign against the group. Sitting in a gilded room at the U.S. ambassador’s residence in Paris, Kerry sounded irritated at the media’s focus on air strikes and ground forces. “The military piece is one piece,” Kerry said. “It’s a critical component — but it’s only one component.”

“Probably far more important than the military in the end,” Kerry continued, is the effort “to start drying up this pool of jihadis.” The goal is to mobilize Arab leaders, preachers, and media outlets behind a message that ISIS does not represent a “pure” vision of Islam, but a grotesque distortion of it. That, they hope, can blunt ISIS’ ability to recruit new fighters among impressionable young Muslim men. Stopping a fighter from signing up, Kerry said, is “a far better mechanism than having to go chase him down in the battlefield.”

U.S. officials say no one is more important to that effort than King Abdullah. And the King is happy to oblige. While Saudi money has long helped nurture a fundamentalist Sunni doctrine that inspires groups from al-Qaeda to Boko Haram, Islamic radicalism has come to threaten the King as well. This helps to explain why the royal palace in Jeddah is guarded by three gated checkpoints, several armored vehicles and a truck-mounted machine gun at its front entrance. Such groups see Abdullah as an American lackey who defames the holy land by cooperating with infidels. After a spate of al-Qaeda attacks within the kingdom in the mid-2000s, the Saudis have worked extremely closely with the U.S. on counterterrorism.

ISIS seems to have raised the King’s anxiety another notch, however. He has banned Saudis from traveling to join the fight in Syria, lest they return to threaten his regime. Last month Saudi authorities arrested dozens of suspects linked to ISIS — including members of an alleged cell plotting attacks within the country.

But Abdullah wields a potent weapon in his defense: his influence over Saudi Arabia’s religious leaders. The King has a symbiotic relationship with his kingdom’s hard-line clerics, whose words hold sway far across the Muslim world. The clerics recognize Abdullah’s legitimacy in return for funding, official positions and Abdullah’s tolerance of their strict form of Islam — which forbids women from driving and imposes beheadings for offenses like adultery, drug possession and sorcery.

Abdullah can also summon his clerics to action. In a speech last month that a U.S. State Department official calls “unprecedented” in its vehemence, Abdullah denounced radical Islamists for using Islam to justify their actions — and castigated Saudi clerics for not making the point more forcefully. Days later, the kingdom’s top religious authority declared that ISIS and al-Qaeda “are enemy No. 1 of Islam.” Another senior cleric soon declared it “a major sin” to join ISIS. He added that the group’s fighters might avoid damnation if they murder their commanders.

The U.S. strategy doesn’t stop with the Saudis. During a visit to Cairo on Saturday, Kerry also urged Egyptian President Abdul Fattah al-Sisi to pressure his country’s religious leaders. Cairo is home to two of the most important institutions of Islamic learning, al-Azhar University and Dar al-Ifta al-Misriyyah, making it “essentially the intellectual heart of the Arab world,” as a senior State Department official puts it. “So one of the issues is to have [Egypt’s] religious institutions speak out against [ISIS] … to have the imams talk about it in Friday sermons, and to otherwise sort of increase the volume on this message.”

The effort also extends beyond the mosque. The U.S. is pressing major Arab media outlets, including Dubai-based al-Arabiya and Qatar’s al-Jazeera, to broadcast more antiradical programming. (State Department officials say Under Secretary of State for Public Diplomacy Richard Stengel — a former managing editor of TIME — will soon return to the region to pursue that topic.)

But the King is the most important player of all, experts say. “Saudi Arabia is the only authority in the region with the power and legitimacy to bring ISIS down,” wrote Nawaf Obaid, of Harvard’s Belfer Center for Science and International Affairs, and Saud al-Sarhan, of the King Faisal Center for Research and Islamic Studies, in a Sept. 9 New York Times op-ed. “[T]he Saudi leadership has a unique form of religious credibility and legitimacy, which will make it far more effective than other governments at delegitimizing ISIS’ monstrous terrorist ideology.”

Much like the date of Kerry’s visit to the royal palace in Jeddah, it is a deep irony that Saudi Arabia has become so critical to extinguishing the flames of Sunni radicalism it helped to spread. But it’s not an irony that Kerry cares to dwell upon. Asked by TIME on Monday about Saudi Arabia’s past responsibility for radical extremism, the Secretary of State bridled.

“There is no constructive purpose whatsoever served by going backwards,” Kerry said. “There are lots of question marks that people can dig into for history about mistakes that were made,” he added. “Nothing is served right now by chewing that over.” 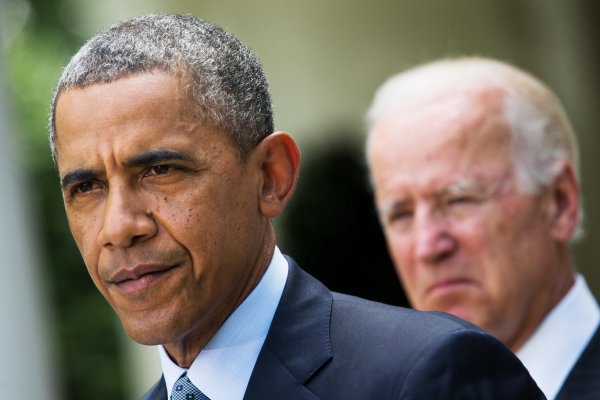