Los Angeles police say Django Unchained actress Danièle Watts was detained and handcuffed after the cops received a 911 call about a couple involved in indecent exposure in a car.

On Thursday, Watts posted an account of the incident on her Facebook page, writing that she had not been doing anything wrong when she was approached by the police: “I was handcuffed and detained by 2 police officers from the Studio City Police Department after refusing to agree that I had done something wrong by showing affection, fully clothed, in a public place,” the post reads.

In a statement, the Los Angeles police said a 911 operator received a call that a man and woman were involved in indecent exposure in a silver Mercedes with the car door open. “Upon further investigation it was determined that no crime had been committed,” the statement reads. “Ms. Watts and her companion were subsequently released.” The department says an internal complaint investigation has been launched to look into the incident.

Watts says she was merely kissing her partner, Brian James Lucas, when the police approached them asking for identification. Lucas gave the police his ID, but Watts refused to hand over hers in the belief that she’d done nothing wrong. The police subsequently handcuffed Watts. According to Lucas’ account on his Facebook page, he believes the police thought Watts was a prostitute.

“It’s not a crime to be fully clothed showing public affection in our car,” Watts said in an interview with CNN Monday. “It’s my right and my pleasure to enjoy myself… I don’t feel like I should be ashamed about it.”

Watts told CNN she was “humbled by the experience” of having her story told to the world. 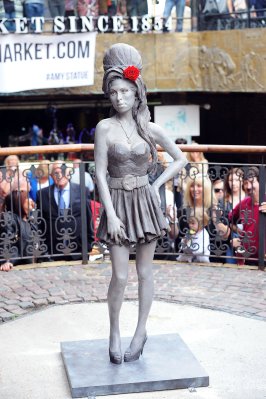 Amy Winehouse Statue Is Unveiled in London
Next Up: Editor's Pick