In this photo taken Saturday, Sept. 13, 2014, residents walk on a lane painted with instructions to separate those using their phones as they walk from others in southwest China's Chongqing Municipality.
AP
By Rishi Iyengar

Chongqing, a vast municipality of 28 million in southwest China, has come up with a lighthearted strategy to remind pedestrians of the dangers of looking down at a smartphone while walking — separate lanes for people using or not using their devices.

Signs and street markings appeared recently in a short section of paving in the city’s entertainment district, indicating that one section of the sidewalk would be a “no cell phone” lane, the Associated Press reports.

“There are lots of elderly people and children in our street, and walking with your cell phone may cause unnecessary collisions here,” said Nong Cheng, a spokeswoman for the district’s property management company. However, she clarified that the initiative was meant to be a satirical way to highlight the dangers of texting and walking.

Many pedestrians have been stopping to take pictures of the markings and the signage, although Nong said most of them don’t actually adhere to the guidelines.

The inspiration for the dual sidewalk came from National Geographic in the U.S., which created similar divisions on a section of pavement in Washington, D.C., in July as part of a televised behavior experiment. 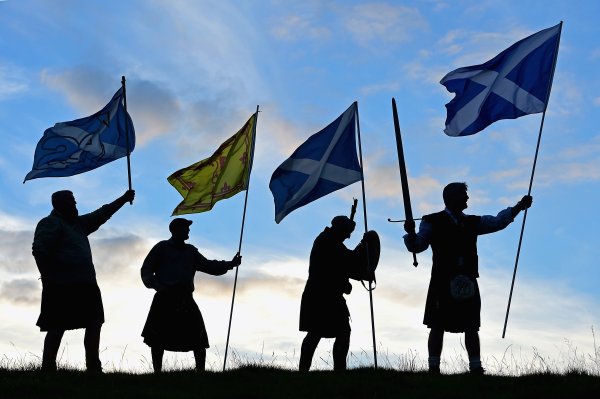 Scottish Referendum Heats Up With 3 Days to Go
Next Up: Editor's Pick