With attacks against Jews on the increase in Germany, Chancellor Angela Merkel pledged on Sunday to step up the battle against anti-Semitism.

Speaking at a rally in the capital Berlin, she said Germany would do all it could to stop the growth of anti-Semitism, which has risen since the Israeli-Palestinian conflict in Gaza, reports the BBC.

“It pains me when I hear that young Jewish parents ask whether they should raise their children in Germany, or elderly Jews who ask if it was right to stay. With this rally, we are making it unmistakably clear: Jewish life belongs to us. It is part of our identity and culture,” she said to a crowd of about 5,000 people.

The rally, organized by the Central Council of Jews in Germany, comes 75 years after the beginning of World War II, says the BBC. Six million Jews were killed during the conflict.

“The legitimate criticism of the political actions of a government — be it ours or of the state of Israel’s — is fine,” Merkel said. “But if it is only used as a cloak for one’s hatred against other people, hatred for Jewish people, then it is a misuse of our basic rights of freedom of opinion and assembly.”

Since the start of the recent conflict in Gaza, tensions between Muslim and Jewish communities have flared up across Europe. There were 131 anti-Semitic incidents reported in Germany in July, up from 53 in June, Reuters reports the German government as saying. 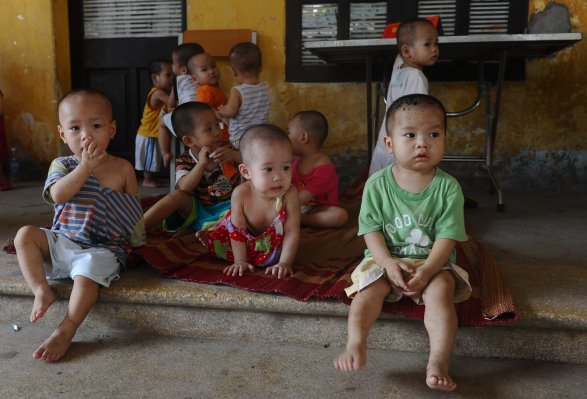 U.S. to Lift Ban on Adopting Vietnamese Youth
Next Up: Editor's Pick