How Putin Got His Way In Ukraine

After all the lives and territory Ukraine has lost this year, it’s easy to lose sight of the way its conflict with Russia began last winter, when Moscow tried to elbow its way into Ukraine’s economic pact with Europe. In response, thousands of ordinary Ukrainians went onto the streets to tell Russia to mind its own business, and the upheavals that followed—from the violent revolution in Kiev to the Russian annexation of Crimea and the ongoing war in eastern Ukraine—have all stemmed from that confrontation. But they might all have been avoided if the European Union (E.U.) had involved Russia in the process from the outset. On Friday, it finally did.

During closed-door talks in Brussels, the trade representatives of Russia, Ukraine and the E.U. quietly agreed to delay the full implementation of the trade deal that started this mess in the first place. Russia got a place at the table in deciding Ukraine’s economic future, and the E.U. in essence accepted Moscow’s pride of place in shaping its neighbor’s affairs. Later that night, the E.U.’s most senior official, European Commission President Jose Manuel Barroso, had a difficult time defending this decision during a summit in Kiev.

The summit’s host, Ukrainian billionaire Viktor Pinchuk, pointed out how nice it would have been to make this concession to Russia before, not after, thousands of Ukrainians had been killed. “Now we are in a difficult and dangerous situation,” Pinchuk reminded Barroso. “So did we have a chance to prevent what happened with a different political strategy of the European Union or the West?” After an attempt to dodge the question—“I am not here as a commentator,” Barroso said— the visiting European official admitted that the force of Russia’s actions this year had obliged Europe to start thinking in terms of pragmatism rather than principles.

“In terms of principles, I think it’s right that the European Union respects the free will of our partners, and it does not accept a Europe divided on spheres of influence,” Barroso said. “But now, to solve the current situation it’s better to focus on what we can do now.”

This focus resulted in the Brussels compromise. Under its terms, the free trade deal between the E.U. and Ukraine will still be ratified on schedule this week, but at the insistence of Moscow, its provisions will not be fully implemented until the start of 2016. For about 15 months, Ukraine will be able to ship its goods to the E.U. without paying export tariffs, but Europeans will not be able to enjoy the same free access to the Ukrainian market. That is what Russia has long demanded.

Recently, at the end of August, when the leaders of Russia and Ukraine met for the first time in nearly three months to discuss the war raging along their border, Vladimir Putin used his time at the microphone to rant about Ukraine’s trade deal with Europe. The Russian President insisted that it would cost Russia around $3 billion if Ukraine went ahead with the agreement, which he said would disrupt the customs rules and sanitary inspections that Russia conducts at its border.

“Nobody ever talked to us about these problems,” Putin fumed. “We were simply told that it’s none of our business.” What seemed to upset him the most was the possibility that, once the trade deal takes effect, European goods would be smuggled into Russia through Ukraine without paying the right taxes. To illustrate the point, Putin even brought a picture of some Polish food mislabeled to look like it came from neighboring Belarus. “It’s written right here that the country of origin is Belarus. But peel off the sticker, and it’s Polish!” he said, waving the photo in the air. “With Ukraine this will happen ten times more. We’ll be inundated, you understand? Inundated!”

In the context of the fighting in eastern Ukraine, which had at that point killed more than 2,000 people, this may have seemed like a petty complaint for Putin to raise during that desperate round of peace talks. But from the start of the conflict this grudge has been at the core of his thinking. Russia, as the dominant power in Eastern Europe, refuses to be left out of Ukraine’s relationship with the West. As Putin said in March when he annexed Crimea, he does not want the West to “make itself at home in our backyard or in our historical territory.”

Most of the tension arose from Europe’s refusal to recognize notions like “historical territory” and geopolitical “backyards,” at least until last week. During the summit in Kiev on Friday, Barroso admitted that Russia had long been demanding a say in the trade talks between the E.U. and Ukraine. He insisted that Moscow had always been refused. “Russia has to recognize the right of Ukraine to negotiate the agreements they want. That is the point.” By allowing Russia a seat at the table in those negotiations, he said, the E.U. would have accepted “the theory of spheres of influence or a kind of limited sovereignty of a country as independent as Ukraine.”

This is roughly what the E.U. accepted with its three-sided deal on Friday, or at least that’s how it looked to many in Ukraine. The day after the Brussels compromise, Ukraine’s Deputy Foreign Minister Danilo Lubkivsky tendered his resignation, saying that to delay the implementation of the trade pact with Europe “sends the wrong signal to everyone, to the aggressor, to our allies, and most importantly, to Ukrainian citizens.” He added: “You cannot delay a choice. Otherwise it’s no choice at all.”

To be sure, the choice to ally with Europe was not unanimous in Ukraine. The eastern and southern provinces would have been happy to remain in Russia’s economic orbit. But the Ukrainians who revolted demanded that their leaders move ahead with E.U. integration on all fronts and without delay, and the former government’s attempt to stall this integration is what resulted in its violent overthrow in February.

Before that, Russia had tried for years to coax and pressure Ukraine to abandon or at least delay its pact with Europe. Igor Yurgens, a former Kremlin adviser who has been directly involved in those efforts since 2008, admitted as much on Friday after the Brussels compromise was made public. “What happened today is exactly what Russia wanted to do before the crisis,” Yurgens told Barroso at the summit in Kiev. “If we did it before the crisis, probably there would be no crisis.” Yurgens added: “I’m sorry.”

That apology would be of little consolation to the families of the Ukrainians killed in this year’s conflict. As Ukraine’s leaders were eager to stress over the weekend, the Brussels compromise with Russia will at least help prevent any more bloodshed. But it will not reverse the events of the last nine months. Ukrainians will just be left to ponder the same question Pinchuk asked of Barroso. If Europe and Ukraine were going to make such concessions to Russia anyway, why didn’t they make them before Putin used force to get what he wanted? It might have saved the Ukrainian people a whole lot of heartache. 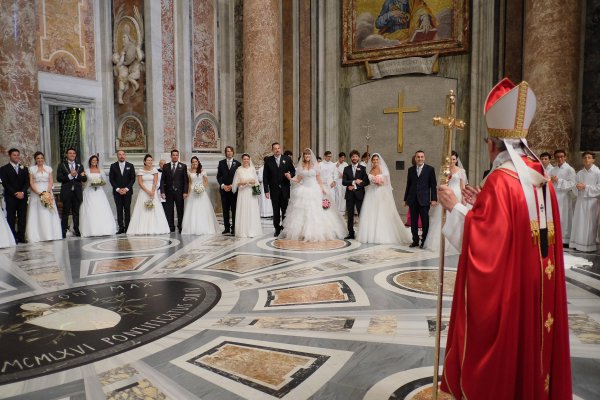 Pope's Presiding Over Marriages Hints at Changes
Next Up: Editor's Pick