Sitting under one of three huge white tents set up in a hot-air balloon field outside of Indianola, Iowa, Bethany Moriarty was digging into a plate of steak. The attraction of a “steak fry” should ostensibly be the meat, but Moriarty, 30, who has “Ready for Hillary” buttons festooned across her chest, is hopping with excitement to see former Secretary of State Hillary Clinton.

“I’m by far the most political person of my family, so I kinda dragged them here,” she says, gesturing across the table to her mother, Rosemary, 65, and her sister, Amanda, 35.

Like many other of the 7,000 Iowans who’ve gathered for Iowa Senator Tom Harkin’s 37th annual Steak Fry, a Democratic fundraiser that has become known as a presidential launchpad, their main topic of conversation is Clinton’s potential candidacy in 2016. “I caucused for Barack Obama in 2008,” Bethany says. “A lot was the hype and the hope we felt behind him and I still feel it. But I feel he’s been pushed aside.”

All three came to the Steak Fry this year to see Clinton speak on her first trip back to Iowa since her 2008 caucus loss. Bethany says she’ll caucus for Clinton in 2016, if she runs. But Rosemary is dubious. “I don’t think America is ready,” she says. “There’s a lot of people who won’t vote for her because she’s a woman. Like Barack Obama, the first African American, when he got elected, but Congress wouldn’t work with him.”

Amanda, twirling her fork pensively in her potato salad, chimes in: “And if you think that, than there are 100,000 people who think it,” she says. “Well, if you say that it becomes true,” Bethany counters. “We have to believe and work to make that not true.” Her mother and sister shrug, clearly not moved to action.

Clinton’s candidacy is still a figment of Bethany’s — and most of the national media’s — imagination. But that hasn’t stopped widespread speculation that Clinton’s visit to the Harkin event represents the unofficial kickoff of her 2016 run. Her shadow campaign, “Ready for Hillary,” has parked a bus emblazoned with its logo outside the Steak Fry and volunteers are waiting five deep to sign up.

The Steak Fry has a carnival-like atmosphere. Iowans in droves wear T-shirts colored for their favorite state and local candidates. By far the most T-shirts are light blue with a simply stated, “Ready” on them — shorthand for “Ready for Hillary.” Attendees carry coolers of beer and lemonade and lay out blankets on the slightly damp ground. They sing along to Bruce Springsteen’s “Born in the U.S.A.,” as they wait for the show to begin.

As is his prerogative on his big day, Harkin is keeping his own schedule. He is retiring and this will be his final Steak Fry. The event is a far cry from the 52 people who attended the first one in 1972. The largest year yet, 2007, saw more than 10,000 people arrive to watch Clinton and then rivals Barack Obama and John Edwards. This year, Harkin and the Clintons arrive from a morning event in Des Moines with 450 Harkin donors 20 minutes after the speaking schedule was due to begin. But they take their time, eating lunch, as Harkin always does, before greeting the press and flipping the traditional steak for the assembled cameras. More than 200 reporters from around the world are present to witness potential history.

“Are you running?” reporters repeatedly shout at Hillary. She demurs. She even pretends not to notice when, the event having finally started down the hill, a speaker starts asking the crowd: “Are you fired up? Are you ready to go? Are you ready for Hillary? ARE YOU READY FOR HILLARY?” he screams as the crowd roars.

“Are you ready, Hillary?” a reporter yells. She ignores all this and chats away with Harkin and his wife Ruth. Her husband can be heard saying: “As long as I’m still married to her, I’m doing good.”

After Harkin introduces the Clintons as the “comeback couple,” Hillary takes the stage to chants of her name. “Wow!” she says. “Hello Iowa. I’m baaaaack!” — a line made famous by the movie Independence Day.

As the crowd cheers and whistles, Clinton says she has a lot to look forward to these days. “First, Bill and I are on constant grandchild watch … So don’t be surprised if we suddenly go sprinting off the stage.”

“And then of course there’s that other thing,” she adds, to a standing ovation. “Well it is true, I am thinking about it. But for today, that is not why I’m here,” she says.

The crowd expresses disapproval at this. “I’m here for the steak!” she says, which gets them cheering again. “For years I was more likely to be eating yak meat in Mongolia, and enjoying it, but thinking a lot of being back home.”

It’s all red meat for the “Ready for Hillary” crowd, of course. But others say her election to the presidency isn’t a sure thing. Carter Bell, 20, president of the University of Iowa Democrats, says she likes what she’s hearing from Clinton, but she’s keeping an open mind for the 2016 caucuses. “I like [Vice President] Joe Biden a lot too. And I’ve met [Maryland Governor] Martin O’Malley a bunch of times as he’s been out here a lot,” she says. “And I love Elizabeth Warren, she’s great, but she may not run.” Bell says Clinton will have to do some work to earn her support.

Sitting on a beach chair nearby, Judy Keller, 66, Des Moines consumer-affairs representative, is convinced. She says she regrets supporting John Edwards in 2008. “I didn’t know that she’d have a chance in ’08,” she says. “ I thought a man would win. But now it’s time. It’s time for a woman. I won’t make the same mistake twice.” 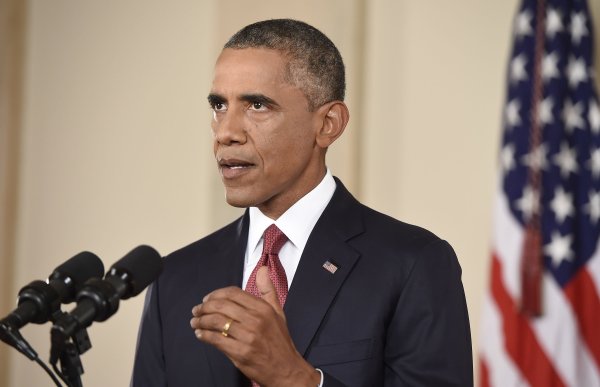 'Degrade' Over 'Destroy'
Next Up: Editor's Pick