White House chief of staff Denis McDonough described narrow Administration’s goals for combatting the Islamic State of Iraq and Greater Syria (ISIS) on Sunday, defining “success” as eliminating the threat, not the organization.

The comments came days after President Barack Obama set a tall order for the U.S. in his address to the nation on Wednesday, pledging to “degrade and ultimately destroy” the militant group. But in public statements and closed-door comments, his Administration is putting more emphasis on the first verb.

For Obama, the risk is a familiar one: overpromising and underdelivering. In 2012, Obama set a “red line” in Syria, suggesting he’d use air strikes in retaliation for the use of chemical weapons by the Assad regime, a standard he repeatedly shifted throughout 2013.

For months this summer, the Obama Administration had set its goal on containing the threat of ISIS, but a combination of factors, including public outcry and congressional uproar over the brutal killing of two American journalists, has led the White House to escalate its rhetoric. But the harsher tone hasn’t meant a change in the underlying aims.

Obama first embraced the “degrade and destroy” formulation in a convoluted press conference in Estonia a day after ISIS released a video of the beheading of journalist Steven Sotloff. But the operative lines were his admission that the group could never truly be eradicated. “As we’ve seen with al-Qaeda, there are always going to be remnants that can cause havoc of any of these networks, in part because of the nature of terrorist activities,” Obama said. “You get a few individuals, and they may be able to carry out a terrorist act.” 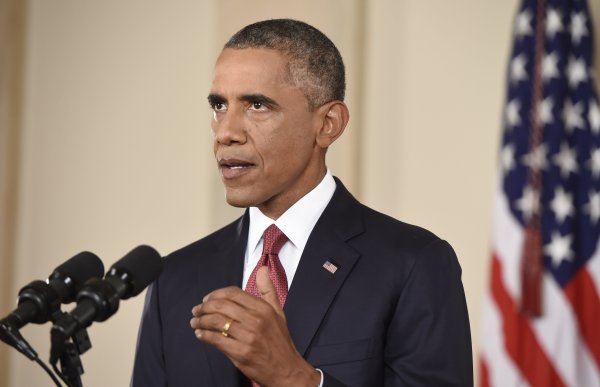 Obama Back in Command
Next Up: Editor's Pick