Kanye West performs during the Outside Lands Music and Arts Festival at Golden Gate Park on Aug. 8, 2014 in San Francisco.
Tim Mosenfelder—Getty Images
By Nolan Feeney

Kanye West is used to getting his way, and when he doesn’t — well, you wouldn’t like him when he’s angry.

“I decided I can’t do this song, I can’t do the rest of the show until everybody stands up,” West said this weekend during one of his concerts in Sydney, Australia, on the tail end of his Yeezus tour. “Unless you got a handicap pass and you get special parking and sh-t.”

Actually, some of his fans did qualify for a handicap pass, special parking and all. It just took Kanye a long time to realize it. West held up his show and singled out two fans who remained seated (and whom were even initially booed by the rest of the audience for seemingly refusing to get up.) “This is the longest I’ve had to wait to do a song, it’s unbelievable,” a frustrated West told the crowd.

Mr. Kim Kardashian eventually figured out the error of his ways after one fan nearly pulled an Aviva Drescher, the Daily Beast reports, and waved a prosthetic limb around the air; concert-goers near the second fan, who was in a wheelchair, tried to signal the fan’s disability to West, who waited for some additional verification before continuing the show. “Now if he is in a wheelchair, then it’s fine,” West said during the exchange, which you can watch in full above. 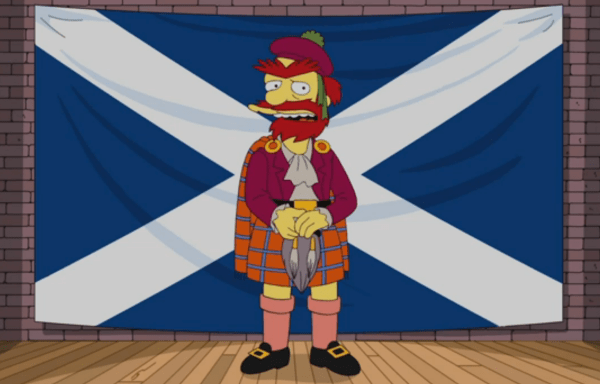 The Simpsons' Groundskeeper Willie Wants an Independent Scotland
Next Up: Editor's Pick