President Barack Obama salutes as he arrives on the South Lawn of the White House, in Washington, D.C., on Sept. 12, 2014
Evan Vucci—AP
By Zeke J Miller

President Barack Obama won the White House largely on his opposition to the Iraq War and was re-elected in 2012 on having ended the conflict. But his Administration is using the never repealed authorization vote as a supplementary legal justification for the planned expansion of the campaign against the Islamic State of Iraq and Greater Syria (ISIS).

The New York Times first reported Friday that Obama Administration officials believe that the 2002 law which authorized the war “would serve as an alternative statutory authority basis on which the President may rely for military action in Iraq.” The news comes just months after National Security Adviser Susan Rice said the Authorization for Use of Military Force (AUMF) was no longer operative.

“With American combat troops having completed their withdrawal from Iraq on December 18, 2001, the Iraq AUMF is no longer used for any U.S. government activities and the Administration fully supports its repeal,” Rice wrote to Speaker of the House John Boehner in July.

During the 2008 Democratic presidential primary, Obama eviscerated then Senator Hillary Clinton for her vote in favor of the 2002 Iraq War Resolution, and in the election, drew sharp contrast with Senator John McCain over how to bring the war to an end.

A senior Administration official says the White House still supports repealing the 2002 law, and fully believes it can use the 2001 AUMF, passed after the attacks of Sept. 11, 2001, to allow the U.S. to strike al-Qaeda, to justify the strikes against ISIS in Iraq and Syria. But the 2002 law would provide additional legal underpinning to strikes in Iraq — and even Syria — as scholars question the applicability of the 2001 authorization to ISIS, which publicly broke with al-Qaeda in Iraq.

“We believe that the President would have the statutory authority to conduct air strikes against [ISIS] in Syria under the 2002 AUMF in at least some circumstances,” the official said.

For the opening stages of the American air campaign, the 160-strike effort largely restricted to humanitarian missions, and protecting American personnel and facilities, Obama relied on his constitutional authority to protect the American people. Hours before Obama announced a broader campaign to “degrade and ultimately destroy” the Islamist militant group Wednesday, officials revealed that Obama would rely on the 2001 AUMF, which the Administration had said previously it hopes to reign in.

In a statement, the senior Administration official explained how the White House applies the 2001 law to ISIS: 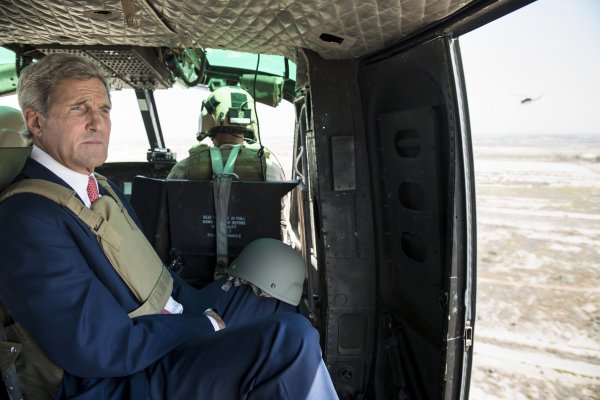