Fred Phelps died early Thursday morning. Phelps was best known for his deeply rooted hatred and promulgating the tasteless slogan “God Hates Fags.” His little group of mostly extended family members that comprised the 59-year-old Westboro Baptist Church in Topeka, Kansas, carried their signs with such ugly and painful statements all over the country. Phelps’ small cult got the most attention for their protests of military and other high-profile funerals, claiming that the slain soldiers deserved to die as a consequence of God’s judgment against America’s tolerance of gay and lesbian people. Such shameful and angry messages, understandably, caused great pain among the mourners and family members grieving their loved ones.

The Washington Post story on Phelps’ death was appropriately headlined “Dry eyes for Fred Phelps,” and commented, “Westboro is an ugly family affair. So ugly that two sons (Mark and Nathan) and a daughter (Dortha Bird) fled their father and his “church.” Another story in the Post reported that Phelps’ group even protested the funeral of Fred Rogers, aka “Mr. Rogers,” explaining that the children’s TV show host neglected to warn young viewers that sodomy is a sin.”

Phelps was 84. The circumstances and health of the last several months of Fred Phelps’ life are surrounded with some mystery. He seemed to have died alone except for a few of the family members who comprised his cultish followers. One estranged son expressed his grief that his father had hurt so many people and reported that the family members who had left Topeka were now being blocked from returning to see Phelps. The Westboro family reports there will be no funeral. The obvious question is, “who would even have bothered to attend, or protest?”

It would be a mistake to celebrate Phelps death, or any death, for the extinguishing of life is, by nature, a moment of loss.

But Fred Phelps’ chosen path shows the sad emptiness of hatred as a way of life, while demonstrating the pain and suffering it causes so many others. His death again reveals that hate never triumphs, but always ends in lonely defeat. Fred Phelps certainly did not leave the world a better place, and he will answer to God for the life he lived, the choices he made, and the harm he inflicted.

Fred Phelps justified his despicable beliefs by distorting the Gospel of Jesus Christ. He demeaned people who were created in God’s Image and preached a theology that lacked any room for grace. But a core tenet of Christian faith is the idea that God’s amazing grace can overcome the reality of human sin. While Phelps could not allow himself to be kind and loving towards those he disliked, God’s love is more than sufficient to overcome his hate. In the end, God loves this world and grace will win regardless of what Fred Phelps or any other self-proclaimed, hate-mongering preachers say.

That’s the beauty of a loving and infinite God who transcends the limitations of human life.

We all have choices to make about hate. We can see the dangers of hate overwhelming our lives – as it did Fred Phelps’ – and all the pain and destruction it causes in the world. We must decide to deal with the anger, which can lead to hatred that we allow to grow and fester within us, because letting it linger can slowly erode and undermine our own moral integrity and choices.

Hatred is ultimately the antithesis of a loving God and the corruption of the world that God has created. Those who use the name of God to legitimize their hatred have blinded themselves to the reality of God’s love and intentions for the world. Love does win in the end. May God lead us all away from the hatreds that too easily beset us as human beings and draw us into the love that can only save us—and the world.

The passing of Fred Phelps is not something to be grateful for, but a powerful reminder of the destruction hatred causes. It illuminates the loneliness that results from a life devoted to resentment and bitterness. But Christian faith audaciously proclaims that love conquers hate. This is a lesson that Fred Phelps is perhaps just beginning to learn.

Jim Wallis is president of Sojourners. His book, On God’s Side: What Religion Forgets and Politics Hasn’t Learned About Serving the Common Good, is now available. Watch the Story of the Common Good HERE. Follow Jim on Twitter @JimWallis. 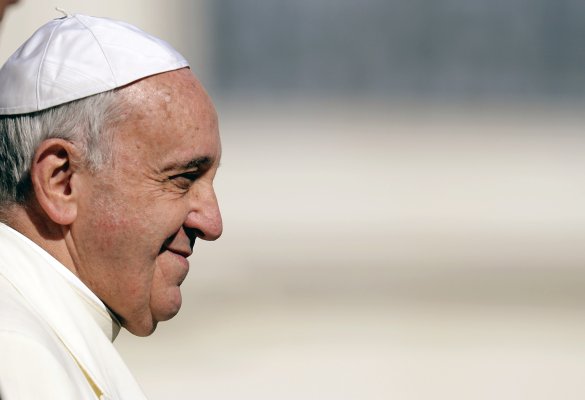 And the Greatest Leader in the World Is...
Next Up: Editor's Pick