Education Secretary Arne Duncan and Attorney General Eric Holder meet with a preschool class prior to participating in a discussion on the importance of universal access to preschool at J. Ormond Wilson Elementary School in Washington, March 21, 2014.
Cliff Owen&mdash;AP
By Denver Nicks and Charlotte Alter

Black students in American public schools are significantly more likely than white students to be suspended and the racial disparity begins even as early as preschool, according to a new government report.

The data released Friday by the Department of Education’s Office for Civil Rights portrays significant racial disparities that persist across the public education system. Black students, for instance, represent just 18 percent of preschool enrollment but 42 percent of the students who are suspended once. Only about 60 percent of public school districts offer some form of preschool.

“It is clear that the United States has a great distance to go to meet our goal of providing opportunities for every student to succeed,” Secretary of Education Arne Duncan said in a statement.

The report notes that suspended students are more likely to be suspended again and less likely to graduate.

“Every data point represents a life impacted and a future potentially diverted or derailed,” Attorney General Eric Holder said. “This Administration is moving aggressively to disrupt the school-to-prison pipeline in order to ensure that all of our young people have equal educational opportunities.”

The report echoed complaints long made by advocates for more equity in the education system. Ricardo Martinez, who runs Padres y Jóvenes Unidos, a Colorado nonprofit devoted to ending what it sees as a school-to-prison pipeline, said the problem extends far beyond preschool. “If a student mouths off to a teacher, a white student might just get a talking to, but an African American male would get sent to the dean,” he said.

Martinez said that some of the harsh discipline resulted from zero-tolerance policies implemented in the aftermath of the Columbine school shooting, but that black and Latino students seemed to bear the brunt of the punishments. “The reaction to Columbine became a real over-reaction,” he said. “We want to keep schools safe, but it became such a detriment to most students, especially students of color, because everything became a crime.”

Increased police presence in schools and over-reaction to small misbehaviors, Martinez added, is funneling more kids out of classrooms and into situations where they are more likely to run into trouble with the law. “Every time a police officer is called in and a student is paraded through with their hands cuffed, how many tens of students have seen that?” he said. “Because of the way the institutional racism works, especially in these communities, there’s a very strong prison-like environment, where no deed goes unpunished.”

Among the other findings in the report, which was billed as the first comprehensive look at civil rights data drawn from public schools in more than a decade, is that black and Latino students are more likely to have less experienced, lower-paid teachers. 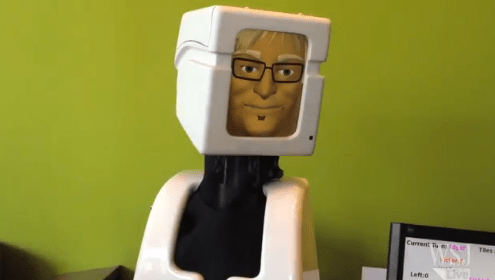 This Robot Is the Rudest Scrabble Player Ever
Next Up: Editor's Pick