On Friday morning, the New York Times published an op-ed from infectious disease expert Michael T. Osterholm of the University of Minnesota called “What We’re Afraid To Say About Ebola.” In the piece, Osterholm addresses the dangerous possibility that Ebola, which is currently spread via direct contact with infected bodily fluids, could mutate and become transmittable through the air.

Osterholm is right in saying that possibility would be terrifying, but other experts say he’s off-base when it comes to how likely that situation is—and how concerned infectious disease experts should be about it.

“I am asked this often,” says Dr. Anthony Fauci, the director of the National Institute of Allergy and Infectious Diseases (NIAID). “The answer is always going to be ‘yes , it’s possible,’ but then people wind up in a panic. Practically speaking, it is not likely. I could never tell the New York Times editorial board that they’re wrong because it’s not impossible. But it’s very unusual for a virus to change how it’s transmitted.”

Viruses mutate and change—no one is arguing with that. When a virus infects a lot of people, it has more opportunities to replicate, and therefore more opportunities to mutate. However, Fauci explains, the overwhelming majority of these mutations are irrelevant. Among the minority that are relevant, there are several changes that are much more likely than a new type of transmission. For instance, a virus could mutate and become resistant to the drugs used to treat it. It could mutate and become more virulent. It could mutate and spread easier. But to mutate and completely change how it transmits from one person to another, while not impossible, is very unusual.

Take HIV. It’s infected around 77 million people and killed around 35 million and it’s constantly replicating in the millions of people currently infected. “Of all the years we’ve known HIV, and with all the replication and mutation, it has never changed its transmission,” says Fauci.

In his op-ed, Osterholm cites a 2012 study in which researchers were able to show in a lab setting that a strain of Ebola could spread in the air from pigs to monkeys. It should be noted, that the virus did not then spread from monkey to more monkeys. Not to mention, the lab setting for this scenario was important. “You can make almost anything happen in the lab,” says Fauci.

“Is it at the back of my mind? Yes. I will watch out for it as we follow the evolution of the virus,” he says. “But that is not the paramount issue on my mind because it’s fundamentally unlikely.” 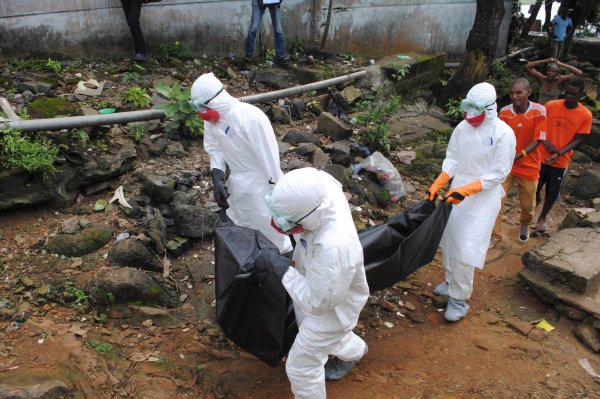 WHO: More Health Care Workers Needed to Combat Ebola
Next Up: Editor's Pick