Georgia Democrat Michelle Nunn’s Senate campaign is out with a new ad Friday, obtained first by TIME, hitting her GOP opponent David Perdue for pay discrimination when he was CEO of Dollar General.

From the ad’s script:

Federal investigators for the Equal Employment Opportunity Commission found that female store managers at Perdue’s Dollar General “were discriminated against” and “generally were paid less” than males under his tenure, according to a Mother Jones story confirmed by Georgia PolitiFact. Dollar General paid a settlement of almost $19 million to 2,100 female employees for not paying them equal wages.

Democrats nationally and in races like Georgia’s have pushed the idea that Republicans are not for equal pay and have spoken of the GOP waging a “war against women” on reproductive and economic policy. It has proven an effective message with female voters. Democrats lost the women’s vote in 2010, and with it control of the House and six Senate seats. Determined not to make the same mistake, they introduced a women’s economic agenda, including the Paycheck Fairness Act, which has been voted down twice in the Senate by Republicans this year. Republicans argue the bill is a sop to trial lawyers and have introduced their own version, which incentivizes employers to provide equal pay, rather than punishing them on the regulatory side, as the Democrats favor.

Nunn is trailing Perdue slightly—by 1.6 percentage points— in polls, according to an average of Georgia polls by Real Clear Politics. But she’s beating him amongst women, 45% to 33% in a recent CBS/New York Times survey. In order to win, she’ll need to maintain that edge and build on it. Thus the ads hitting Perdue as bad for women.

“Women understand the negative impact of Obama’s failed policies better than anyone, from losing their doctors due to Obamacare and feeling the effects of Obama’s economy on their hard-earned paychecks,” says Megan Whittemore, a spokeswoman for the Perdue campaign. “David absolutely believes in equal pay for equal work. That is the law and he has always supported that. Unlike Michelle Nunn who will make it harder for women to succeed, David will be a strong voice for Georgia’s women and families in the U.S. Senate.” Meanwhile, Perdue has an ad out hitting her as too liberal for Georgia. 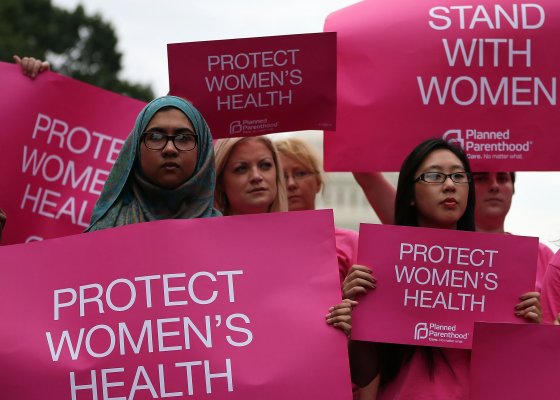 Planned Parenthood Pushes Back Against GOP on Birth Control Support
Next Up: Editor's Pick