Why Ted Cruz Was Booed Off Stage at a Christian Event

While the nation watched President Obama primetime address the threat of ISIS Wednesday night, something else was happening in Washington: Senator Ted Cruz was getting booed off the stage of a Christian event.

Cruz is often considered a rising darling of the American Christian right. He speaks at evangelical gatherings in the country, talks to groups of conservative pastors and headlines events with the Family Research Council. But Wednesday night, his Christian audience was largely Eastern and Arab. The brand of conservative, American evangelicalism that Cruz often champions—one that often aligns itself with the state of Israel’s interests—did not sit well with everyone in attendance.

Cruz was keynoting a gala for In Defense of Christians (IDC), an advocacy and awareness group that aims to bring the U.S.’s attention to the plight of ancient Christian communities in the Middle East, and to protect the rights of other religious minority groups in the region. This week, IDC is hosting a three-day Summit, a conference bringing together a range of Middle Eastern Christians—Orthodox, Catholic, Coptic, Syriac, Lebanese, Assyrian, to name a few—to foster a new sense of unity in the midst of a politically fraught season. Most of the panels at the summit are of a religious nature, but a handful of political leaders are slated gave remarks as well, including Senator Rob Portman (R-OH). Former Secretary of Transportation Ray LaHood was Wednesday’s gala’s master of ceremonies, but Cruz was tapped to give a keynote.

Cruz initially received applause for his opening remarks that the group was united in defense of Christians, Jews, and “people of good faith who are standing together against those who would persecute and murder those who dare to disagree with their religious teachings.”

Things turned sour within minutes. “ISIS, Al Qaeda, Hezbollah, Hamas, and their state sponsors like Syria and Iran, are all engaged in a vicious genocidal campaign to destroy religious minorities in the Middle East,” Cruz said. “Sometimes we are told not to lump these groups together, but we have to understand their so-called nuances and differences. . . . In 1948 Jews throughout the Middle East faced murder and extermination and fled to the nation of Israel. And today Christians have no better ally than the Jewish state.”

His audience at the Omni Shoreham Hotel began to boo.

The booing got louder.

Cruz pressed on, adding that his heart “weeps that the men and women here will not stand in solidarity with Jews and Christians alike who are persecuted by radicals who seek to murder them.”

With that, Cruz walked off stage.

Later Cruz reacted to the event on his Facebook page. “Tonight in Washington should have been a night of unity as we came together for the inaugural event for a group that calls itself ‘In Defense of Christians,’” he wrote. “Instead, it unfortunately deteriorated into a shameful display of bigotry and hatred. . . . Anti-Semitism is a corrosive evil, and it reared its ugly head tonight.”

Baaklini attempted to smooth over the situation. “As Cardinal Rai so eloquently put it to the attendees of the In Defense of Christians’ inaugural Summit gala dinner: ‘At every wedding, there are a few problems,’” he said in a statement following the incident. “In this case, a few politically motivated opportunists chose to divide a room that for more than 48 hours sought unity in opposing the shared threat of genocide, faced not only by our Christian brothers and sisters, but our Jewish brothers and sisters and people of all other faiths and all people of good will.”

At its core, Cruz’s problem was one of context. First, he pinned his remarks to the conflict between Israel and Hamas when one of the group’s primary agenda points was actually the plight of Iraqi Christians. Second, Christians are far from a monolithic group, especially when it comes to views on policy on Israel and the Middle East. The American evangelicals Cruz typically addresses tend to be worlds apart historically, culturally, theologically, and politically from the Christian leaders in attendance.

Most American evangelicals are likely not even familiar with the Christian leaders gathered at this event, even though the headliners are the Rick Warrens, Cardinal Dolans, and even Pope Francises of their own Eastern Christendom communities, who also met with Obama at the White House on Thursday: Patriarch Mar Bechara Boutros Cardinal Raï, Maronite Patriarch of Antioch and All the East; Gregorios III Laham, Melkite Greek Catholic Patirarch of Antioch and All the East, Alexandria, and Jerusalem; Ignatius Youssef III Younan, Syriac Catholic Patriarch of Antioch and All the East; Aram I Keshishian, Catholicos of the Great House of Cilicia of the Armenian Apostolic Church; Metropolitan Joseph Al-Zehlawi, Archbishop of New York and All North America for the Antiochian Orthodox Christian Archdiocese of North America; Bishop Angaelos, General Bishop of the Coptic Orthodox Church of Alexandria; Ibrahim Ibrahim, Bishop Emeritus of Chaldean Eparchy of Saint Thomas the Apostle.

Whether or not Cruz meant to rile up the crowd to rally his own base or whether it was all a giant mistake is hard to parse. Whatever the case, it caused quite a stir. James Zogby, president of the Arab American Institute and another speaker at IDC’s conference, calls Cruz’s performance “bizarre” yet “expected.” “Like most other blind ideologues on the far right, he cared not a bit for the reality and the sensitivities of Middle East Christians,” he says. “If policy makers want to help Christians, they will first listen to them, before they try to lecture them. Having an ‘I love Israel, and I don’t care about the rest of the Arab World’ mindset may work in US politics, but it’s why we are in the mess we are in across the region.”

Baaklini, the IDC president, says the incident only serves as a reminder that unity, especially among diverse Christian groups, is still needed. “Tonight’s events make clearer than ever, that In Defense of Christians is desperately needed in a world that remains divided to the point where even the most fundamental value of life and human dignity are cast aside,” he said. “We remain undaunted and focused on achieving our goals.” 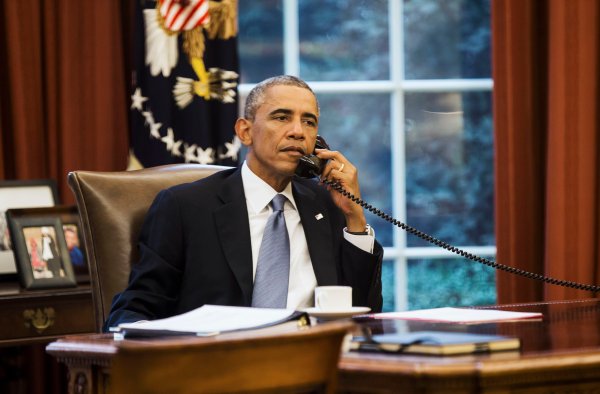 Anti-ISIS War May Be Illegal
Next Up: Editor's Pick