Feminism Comes to the Forefront of Swedish Politics

Sweden is already known for its progressive policies, but on Sept. 14, this Scandinavian country could be among the first in the world to elect a feminist party to its Parliament.

Feministiskt Initiativ — a left-leaning and antiracist political party that was founded in 2005 — has gained popularity in recent months: polls show the party close to or passing the 4% bar needed to obtain seats in Stockholm’s Parliament. If the left-leaning parties — with the Swedish Social Democratic Party in the lead — secure enough votes and the feminists get 4%, they will likely help form the next government.

With its slogan “Out with the racists, in with the feminists,” the party has broadened traditional feminist values to also fight discrimination on the basis of race, sexual identity and physical disabilities. The party has grown from about 1,500 members in January to more than 17,000 members in July, said Gudrun Schyman, party leader and one of the founders of Feministiskt Initiativ.

“We haven’t reached the goals when it comes to gender equality,” Schyman said. “There has been a myth that we are so advanced, that we have come so far in Sweden that we don’t have to talk about it, we don’t have to do anything.”

While Sweden ranks No. 4 in the 2013 Global Gender Gap Index, which measures equality in the areas of economics, politics, education and health, 95% of Swedish top leaders in listed companies are men. Recent studies also show that Swedish women have 85% of men’s wages and 66% of their pensions.

Sweden is also known for its groundbreaking laws on maternity and paternity leave. But the feminist say that more reforms are needed to make parental leave equal and they propose it should be individualized to fit all kinds of families, including transgender and same-sex ones. While parents are entitled to 480 days of paid leave and the days can be split between parents, a 2012 study shows that dads took only 24% of the total leave.

Schyman, 66, says that the feminist party’s success is due to a carefully crafted door-to-door campaign: during the pas 12 months, Schyman visited every Swedish home where the host pledged to gather a crowd of at least 25 people. During the two-hour-long meetings, Schyman would talk about the growing racism in Swedish society, the need for better pensions and equal pay. The party also plans to set up an Equality Ministry as a permanent government organ. These talking points resonated strongly with a group of Swedish society — where 16% of the population is foreign-born, a higher percentage than in the U.S. — that feels alienated by more established parties.

Feminist Initiativ also gained attention by riding a wave of antiracist feelings that have emerged after increasingly anti-immigration parties, like Sverigedemokraterna, began to gain seats in the national parliament in the 2010 election.

Feministiskt Initiativ has also had success in European politics. In May, the feminists got 5.3% of the Swedes’ votes and a Roma woman, Soraya Post, was welcomed as the first member of a feminist party to sit in the European Parliament.

Schyman believes her party can spur a movement throughout Scandinavia and Europe: she hopes that by 2019, the year of the next European Parliament elections, there will be enough feminist voters in other European countries to form a European feminist-party group. Poland, Germany, France and Italy are among countries that already have organized feminist parties in their individual states.

Yasmine Ergas, director of the gender and public-policy specialization at the School of International and Public Affairs at Columbia University in New York City, says it makes sense that a feminist party has so much support in Sweden.

“The most important thing is to have the ability to mobilize consent,” Ergas said. “There must be a degree of consent in the society about the idea that women rights needs further approach and I think Sweden has that.”

But Feministiskt Initiativ has been criticized for being a populist party or for attracting voters with easy slogans that aren’t backed by financially sounded policy plans. Ebba Busch Thor and Mikael Oscarsson, members of the conservative party Kristdemokraterna, wrote in an opinion piece in the Swedish newspaper Upsala Nya Tidning that the feminist party has “totalitarian features” and that the party “proposes expenses of hundreds of millions Swedish krona without any kind of financial strategy.”

Among the propositions in the feminist party’s economic plan is a reduction of the workday from eight to six hours. Such reform would cost the Swedish government up to $1.6 billion during a 10-year-long transition period, according to data published by the feminist party. In addition, the feminists propose free public transport, extensive efforts to stop domestic violence and an equality fund of $2 billion to speed up the equal-pay process. These reforms will largely be funded by increased taxes but also by measures such as reduction of funding to the Swedish military.

“When the welfare system is not working, it affects women very much,” Schyman said, ”and we think it’s quite normal that you take responsibility for this all of you no matter if you are rich or not and if you have a lot of money you can pay some more tax.”

Recent polls seem to side with Feminist Initiativ, pointing to a likely change in government from the current right-wing coalition Alliansen toward a government led by the Social Democrats and the Green Party. To get a majority in the parliament, the next administration is likely to cooperate with the feminists, and last week Schyman went public with her intent to back the Social Democrat leader Stefan Lofven as Prime Minister if they pass the 4% bar in the elections on Sunday.

This summer, during the political rally in Almedalen park in the city of Visby, the feminists rallied the crowds at St. Karin’s ruin, a desolated church from the 14th century. Their “antiracist celebration” was held the same day as Jimmie Akesson, party leader of anti-immigrant party Sverigedemokraterna spoke in front of the crowds a couple of hundreds of meters away.

Hundreds of supporters — donning pink balloons and clothing, the color of the party — came to rally in favor of Feministiskt Initiativ. The renowned Swedish rapper Behrang Miri also performed to a crowd of hundreds.

“We have the possibility to show that it is possible to get these ideas going in the Parliament and in people’s minds,” said Bengt Ortegren, 68, member and volunteer at Feministiskt Initiativ. “I think that is the most important really that there will be new processes going in people’s minds. “

For him, violence against women was one of the main reasons to join the party. “In all the world there is a lot of violence and oppression against women and that is a big issue,” he said. “Perhaps the biggest.” 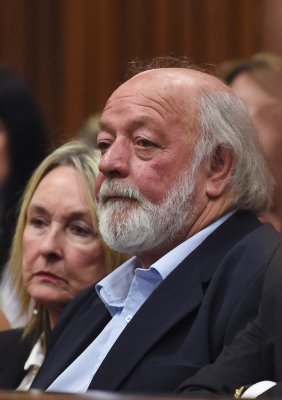 Reeva Steenkamp's Parents Say 'Justice Was Not Served'
Next Up: Editor's Pick