These Girls Are Fighting Sexism With a Video Game About Tampons

Two New York high schoolers are hoping to combat misogyny with Tampon Run, a game that cleverly replaces guns in an old school shooter game with, well, tampons. The girls, who graduated from the Girls Who Code camp — a program that teaches girls to code in hopes of closing the gender gap in tech — this summer, thought it was strange that violence and guns seem to be so mainstream in our culture while talking about periods — which every woman experiences — is not. Hence the invention of Tampon Run. In the game, tampons are used as projectiles to throw at oncoming enemies.

This project is a welcome development after a summer filled with horrible news about women and the gaming industry. After several female gamers and journalists received death threats, a conversation about gendered bullying began and continues to swirl on Twitter with the hashtag #GamerGate. (Here’s a good explainer of the situation.)

TIME spoke with the tampon game creators, Andrea Gonzales, 16, and Sophie Houser, 17, about their project, misogyny in gaming and the history of tampons as weapons.

TIME: How did you think of using tampons in a video game?

Gonzales: I had been pretty vocal about wanting to make a video game and maybe something with a feminist twist to it because I thought the hyper-sexualization of women in video games was a very addressable issue. So I kind of pitched that idea to my class to get people to come and join the group, and Sophie joined. And then we were brainstorming because we also wanted to incorporate a social justice message into the game. And Sophie joked that we should throw tampons at people, and then we realized that was something we could actually do.

Do you think there’s a sense that you can’t really talk about periods?

Houser: Definitely. Other than just doing research online and reading articles, we both felt that first hand. I have guy friends who can talk about whatever they want — we’re very open about each other, and they’ll make poop jokes and things like that — but whenever I try to bring up menstruation with them and talk about it, I’m just shut down. They don’t want to talk about it. They think it’s gross. Even my brother when I’ve talked to him about it, he shuts me down.

Gonzales: In middle school, there was kind of a big commotion in my hallway. There was a circle around something, and I was wondering what was going on, so I went to the circle, and there was just an unwrapped tampon lying on the floor. And it wasn’t used or anything, it was just unwrapped, and the applicator was pushed out so you could see the actual thing. And I just thought it was so weird and bizarre [that it was such a big deal].

Also just on an international level there are so many cultures which are so uncomfortable talking about menstruation that women end up isolating themselves while they’re menstruating and literally putting themselves in a room for a week.

Sophie: They’re not allowed to touch the food or really interact with their families. It’s really horrible. And it’s great that even through coming up with this idea and deciding to make this game, we got to learn so much more.

You bring up in the intro text to the game that violence is extremely common in video games, and yet we still have a hard time talking about really basic things like menstruation.

Houser: It seemed so silly to us that we have all these video games where you can shoot people and kill people, and it’s so normal that you can have a video game where you can hold a gun and shoot it but none of us can talk about something so normal like menstruation, which most every woman does for a large portion of her life.

Right now in the video gaming industry there’s horrible misogyny, and I guess that was just another aspect we wanted to cover in the game.

Andrea: I play those video games, and I enjoy them but then I realize that those aren’t normal things that people should be okay with experiencing. Obviously, [most games are] not going around shooting people in real life. But the fact that guns and violence are normalized through video games—we thought it would be kind of funny if we could do the same thing with tampons.

There has been a lot of controversy with #GamerGate over misogyny in the video game world recently. Does that surprise you? And does it deter you at all from wanting to get involved in designing video games or coding or tech in general?

Andrea: It doesn’t deter me from getting involved in that industry, if anything I feel like it means we need more women to help stand up for ourselves.

What has the reaction been to the game so far? What do your guy friends think of it?

Houser: Actually a few days ago after we released the game, I had a guy friend come up to me and say that he realized that he actually did shut me down every time we talked about menstruation. And he was like, ‘I don’t know why I do that. That’s so weird.’ And that was such a great moment because I had actually reached someone that I knew and changed their opinion.

In general, we’ve gotten emails from people all around the world, and from men and women. It’s so wonderful that we’re reaching so many people, and making people think about it and discuss it. It’s what we wanted to do with the game.

What is your plan going forward?

Houser: We are definitely planning on working on it. We are trying to bring it mobile. And then maybe also some kind of high score leader board system so people can interact with each other through the high scores. So those are our two main goals right now.

Andrea: And then also on the side when people email us, they’ve been suggesting power ups or features we could ad to the game like maxi pad shields or super absorbency tampons or other types of enemies that we could implement into the game. And it’s been so awesome, and I’m really excited to start working those things in. 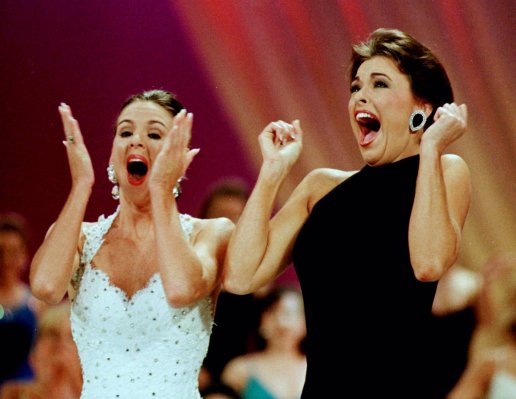 Funniest Faces of Past Miss America Winners
Next Up: Editor's Pick