See the Effects of Climate Change in 3 Birds

By David Johnson and Alexander Ho 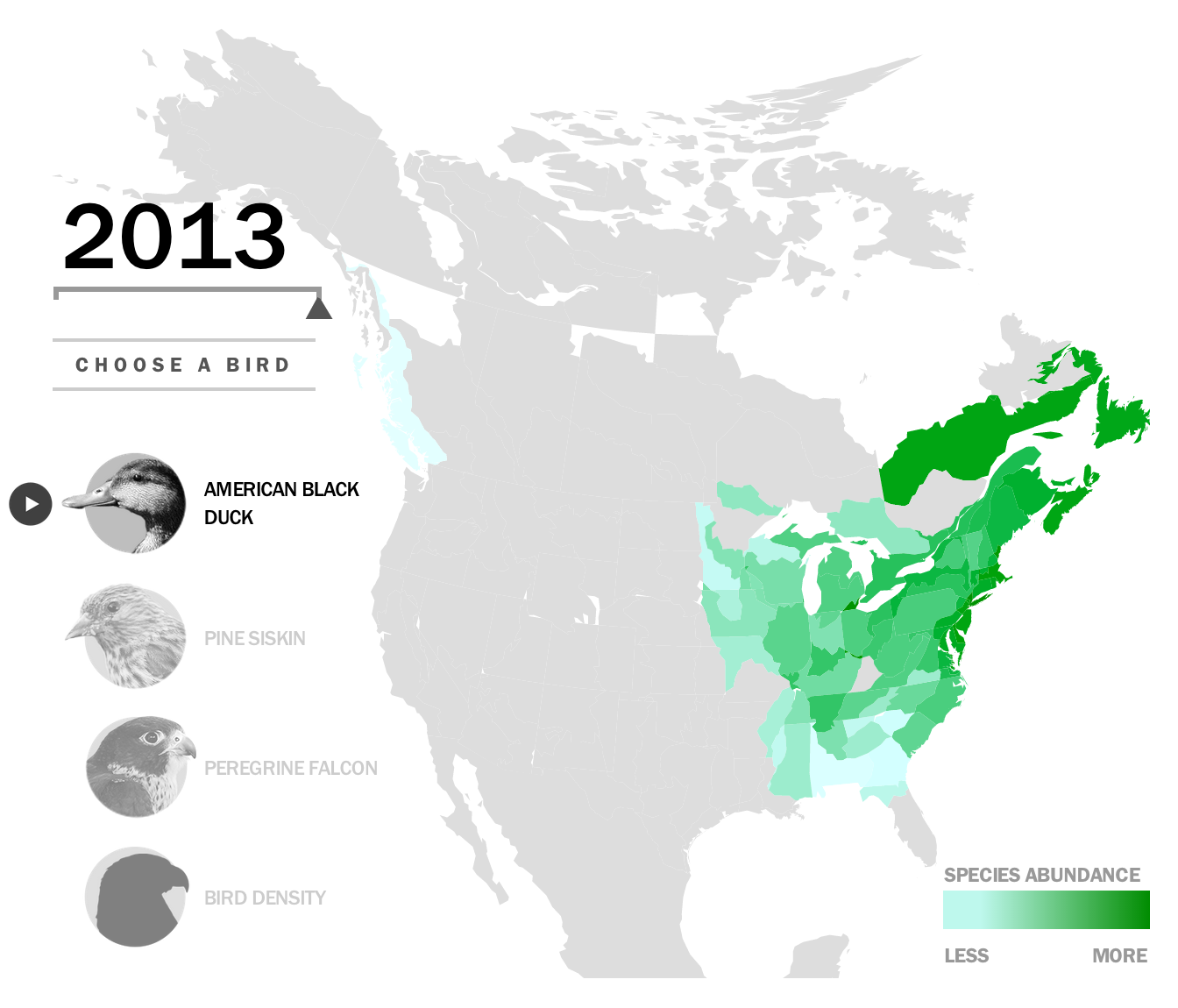 Looking for signs of climate change? You can check the temperatures of the oceans or the density of polar ice caps. Or you can see which birds are gathering outside your window.

A Birds & Climate Change report released this week by the Audubon Society predicts that global warming will severely threaten nearly half of U.S. birds by the year 2100. And birds are already on the move, according to the society’s research. By mapping the historical data used in Audubon’s climate study, we see can that birds have migrated further north by an average of 40 miles in the past 48 years as temperatures increase. The map above highlights three species whose center of abundance has moved by over 200 miles.

The winter migration data is the fruit of the longest citizen science project in existence, called the Christmas Bird Count. Thousands of volunteers across North America head out every winter to track bird locations in over 2,300 designated areas. Audubon scientists aggregate data along conservation regions and state lines and then they account for the varying effort of bird watchers (watch out slackers) to produce an “abundance index” for each species.

The maps reflect this index for three birds that highlight how warmer winters are influencing species differently. Sixty one percent of the 305 Christmas Bird Count species are moving north — some by more than 200 miles, like the Pine Siskin and American Black Duck. Fewer species are going south, as their winter ranges are shrinking on the whole, with the remaining suitable climates now left further south. This pattern is observed in the Peregrine Falcon, though its increased abundance is also due to pesticide bans.

Data was provided by the Aududon Society, with calculations by Candan Soykan, an ecologist for Audubon. The “abundance index” for the three species shown on the map is based on the number of birds observed, by species, for each survey in the Christmas Bird Count, adjusted for variation in bird watching effort, among other factors.

The relative abundance for the map of bird density standardizes each species’ abundance index to a common scale before combining across species to provide an overall estimate. Standardization prevents abundant or more detectable species from dominating patterns in the map. To accommodate some species dramatically changing in abundance over the 48-year interval, median values are used. These median values for each year are averaged by decade (except in the case of 1966 to 1973) to be used on the time slider and map.